The first hint that something’s not exactly honest about this “Capitol TV” spot: President Snow’s insistence that Panem has known only peace. Then again, any Hunger Games fan won’t be surprised that everyone’s least favorite fictional world leader is acting creepy.

Anyone who’s seen the first two Hunger Games movies knows it’s far from true that the region is a peaceful one—but as Lionsgate ramps up the countdown to Mockingjay Part 1, the penultimate installment, the studio is leaning hard on the propaganda angle, which they’ve also used for the posters. And it’s easy to see why that’s the teaser format of choice: even though the PSA-style spot starring President Snow is all shiny and white, the promise of peace also contains a threat, a not-so-veiled indication of what will happen to those who don’t go along with the plan. (Not-so-veiled = “It is you who will bleed.”) Anticipation for the movie is already high, and the stakes are being raised months in advance, even without a glimpse of Jennifer Lawrence as Katniss.

And then there’s Peeta. His fate was left unsettled at the end of Catching Fire—Katniss was rescued and on her way to District 13 without him—and it’s more clear than ever that his life and loyalty hangs in the balance. 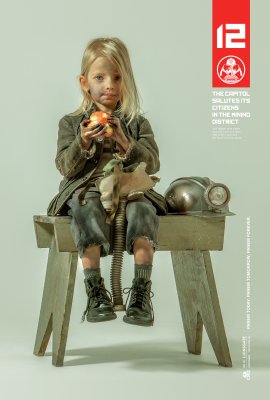