A music video made by several singers as a tribute to Indonesian presidential candidate Prabowo Subianto is causing outrage with its strong Nazi overtones.

In the video, an adaptation of the Queen classic “We Will Rock You,” musician Ahmad Dhani sports a fascist-style uniform and holds a golden Garuda — a mythical bird that is Indonesia’s emblem but which, against the black of his paramilitary attire, looks uncomfortably like the German imperial eagle that the Nazis incorporated into their iconography.

That turns out to be an apt description. German news magazine Der Spiegel pointed out that Dhani’s military costume is eerily similar to the uniform worn by SS commander Heinrich Himmler. “Dhani wears the same emblem on the lapel and the same red breast-pocket lining,” it said Tuesday, comparing the photos of the two in a photo gallery.

Brian May, Queen’s lead guitarist, has waded into the controversy, saying “of course this is completely unauthorised by us.”

As the July 9 election is approaching, the campaign has been heating up, with supporters of both presidential candidates using social media to appeal to the young, urban voters. Dhani’s music video for Prabowo was released shortly after pop musicians like Oppie Andaresta and rock band Slank, who support rival candidate Joko Widodo, made their own song and music video, titled “Two-Finger Salute.”

On his Facebook page on Friday, Prabowo thanked Dhani and other singers for their “contribution,” saying: “This video is boosting our fighting spirit!”

While the appeal of Nazi chic is not uncommon in Indonesia and elsewhere in Asia — a Nazi-themed café reopened in the Indonesian city of Bandung just days ago — it is particularly telling that fascist imagery has been used to drum up support for Prabowo, who was discharged from military in 1998 over the abduction of pro-democracy activists, and who is given to such strongman gestures as appearing at campaign rallies on horseback before an honor guard.

Over the weekend, American journalist Allan Nairn posted on his blog a 2001 interview, in which Prabowo said that Indonesia needed “a benign authoritarian regime.” The former general, who made clear his admiration toward Pakistan’s then ruling strongman Pervez Musharraf, told Nairn: “Do I have the guts, am I ready to be called a fascist dictator? Musharraf had the guts.”

Hopefully Indonesia won’t get a chance to find out.

— With reporting by Stephanie Burnett 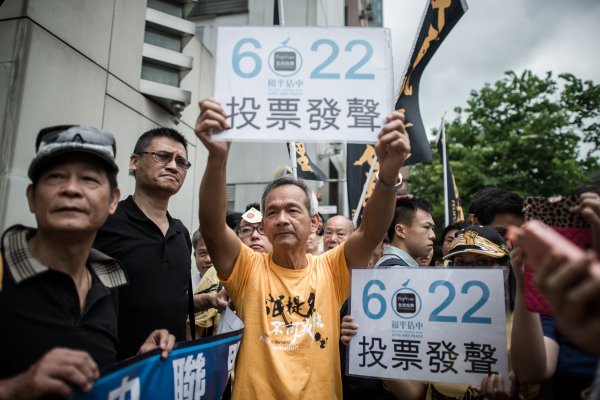 Are Hong Kong's Democracy Activists Chasing an Illusory Goal?
Next Up: Editor's Pick