Former Vice President Dick Cheney on Tuesday stood by the Bush Administration’s decision to wage war in Iraq, saying he has never second-guessed the decision even with Iraq once again descending into chaos.

“I was a strong advocate of going into Iraq,” Cheney told PBS in an interview, a week after launching a new political group designed to boost his foreign policy and national-security policies. “I think that was the right decision then, and I still believe that today.”

“I think we did what we had to do,” Cheney added, saying he is still not convinced Iraq didn’t have weapons of mass destruction before the 2003 invasion. “And you don’t get to go back and say, well, we would have — what if we’d ignored all the intelligence?”

Cheney blasted President Barack Obama’s handling of the situation in Iraq, saying he should have more forcefully pushed to keep U.S. troops in the country after 2011 to help keep the country stable. “For me, the bottom line was, when we left office, Iraq was in good shape,” Cheney said. “And now we’re in a situation where obviously we’ve got another big problem.”

But the former Vice President largely agreed with Obama’s handling of the current crisis that has seen the extremist group Islamic State of Iraq and Greater Syria make significant gains in the country. Cheney called for the deployment of additional U.S. military advisers and a swift transition for the Iraqi government, and he warned that American air strikes could have unintended complications. Cheney said the U.S. response to the Iraq crisis must be part of a broader strategy for the volatile region that he says Obama has not yet developed. He also called on Obama to halt the planned withdrawal of American troops from Afghanistan by the end of 2016.

“I would stop talking about withdrawing from Afghanistan,” Cheney said. “We ought to stay in Afghanistan. We shouldn’t be scaling back.”

Cheney also called for Obama to swiftly work to boost Egyptian President Abdul Fattah al-Sisi, the former military leader who deposed the elected Muslim Brotherhood–led government before his election this year. “I’d help al-Sisi every chance I got,” Cheney said.

Cheney said he was unaware of the conviction of three al-Jazeera journalists in Egypt this week, which has been condemned by the U.S. and by European governments. “I haven’t seen that. I’m not familiar with it,” Cheney said of the news that dominated the front pages of national newspapers on Tuesday. “I missed that one.” 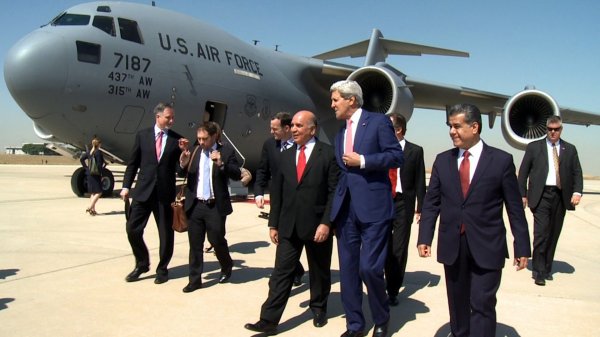 Kerry: No Air Strikes in Iraq
Next Up: Editor's Pick