On Sunday, Mary Cheung, a business executive, braved the steamy weather, and the labyrinthine passageways of Hong Kong University, to cast her vote in an unofficial plebiscite on the city’s democratic future organized by activist group Occupy Central With Love and Peace.

The nonbinding character of the poll failed to dampen her excitement. “The government says this vote is illegal, but what law are we breaking?” Cheung asked, while waiting at the university’s polling station — one of 15 set up across the city. “This is our chance to make our voices heard. We want true democracy.”

Since Friday, when the referendum began, about a 10th of Hong Kong’s population has cast its vote, either in person like Cheung, or online. Voters are asked to express a preference for one of three options that detail how nominations should be made to the territory’s top position, the Chief Executive (CE). Presently, an electoral college of 1,200 proestablishment figures selects the candidates, but many in Hong Kong want candidates to be publicly nominated by the city’s 3.5 million registered voters, and all three referendum options allow for that proposal — much to Beijing’s ire.

Beijing has granted what it sees as an important concession, allowing the CE to be directly elected (if not directly nominated) by voters in 2017. China’s leaders have also learned to tolerate a certain degree of dissent in Hong Kong since they regained control of the semiautonomous territory in 1997. Tens of thousands of Hong Kong protesters take to the streets each year on the anniversaries of the Tiananmen Massacre (June 4) and China’s resumption of sovereignty (July 1). Occasionally, vocal discontent leads to the ouster of a particularly unpopular local politician, or the shelving of a contentious issue.

The ongoing plebiscite, however, is viewed as a more serious challenge to China’s power. What Beijing fears, above all, is that if Hong Kongers are allowed to freely nominate CE candidates, the slate will become filled with figures opposed to the Communist Party, such as popular local firebrand Leung Kwok-hung — a radical legislator more at home on the barricades than in the chamber, who shouted “Long live democracy!” at his swearing in, and who once set fire to the Chinese flag. The fear that somebody even half as radical as Leung could get elected is why Qiao Xiaoyang, chairman of the National People’s Congress Law Committee, stated last March that future CE candidates must “love China” and not confront the central government.

Adding to Beijing’s concern is the Occupy Central movement itself — a sort of redux of the all-encompassing Occupy protests that took place in Hong Kong and other major cities around the world in 2011 and 2012, but this time with a specific focus on the issue of public CE nominations. The group has vowed to bring the financial district of Hong Kong, known as Central, to a standstill if its core demand — that there be “no unreasonable restrictions on the right to stand for election” — is not met. The occupation will take place in July or August.

“They’ll try to remove us with tear gas and water cannons, and we’ll get arrested,” says Benny Tai, one of Occupy Central’s three leaders. “But we’re ready, we’re not going to resist.”

Tai, an associate professor of law at Hong Kong University, sparked off the movement last January when his article “Civil Disobedience Is a Weapon of Mass Destruction” appeared in the Hong Kong Economic Journal. The idea was simple: because Central’s street are so narrow, densely packed and traffic-choked, it would only take few thousand people, perhaps even a few hundred, to paralyze one of the world’s great financial centers by staging a sit-in. “Our goal is to win bargaining power,” says Tai.

It is a quixotic aim. Beijing would regard it as a supreme loss of face, if it was forced to the negotiating table by a group of slogan-chanting democracy activists. Party officials, fearful of copycat protests erupting all over China, would simply not allow the precedent to be set. The only possible outcome, therefore, is the surrender or forcible removal of the protesters, either by the police, or — as has been darkly hinted at in recent weeks — by the People’s Liberation Army garrison, if needs require it.

Beijing has already fired its warning salvo. Earlier this month, it released a white paper affirming its “comprehensive jurisdiction” over the territory and stating that “the most important thing … is to maintain China’s sovereignty, security and development interests.” Many interpret the timing of the document’s release as a warning to the Occupy activists.

While the proposal for a publicly nominated CE has broad support in Hong Kong, the same cannot be said of the sit-in. Some are worried the demonstration could be hijacked by violent elements. The owners of downtown businesses — the area is home to luxury hotels, banks, brand-name boutiques and exclusive malls — are making contingency plans and fretting over the impact that the protest will have on trade. The Hang Seng Index suffered its sharpest fall in three months on Monday, spooked by the potential of political instability.

Occupy Central’s fiercest antagonist, however, is the former government broadcaster Robert Chow. He and his organization Silent Majority — a vaguely ironic title, given that Chow was known as an outspoken daytime talk-show host — commissioned a study that found that a blockage of Central’s main thoroughfares would, in well under an hour, cause massive traffic tailbacks, sealing off vehicular tunnel access to the Kowloon peninsula and effectively cutting off the southwestern district of Hong Kong Island, which is home to nearly half a million people. (The amateurish and hilariously overblown video they made to publicize this scenario probably doesn’t do them any favors, however.)

“What about the ambulances, fire trucks, police cars, or if someone goes into labor and can’t get to a hospital?” asks Chow. “I tell parents of school children that we’re not black people in Alabama struggling against segregation. Because a couple of thousand people want this, the rest of Hong Kong should sit on their asses and say nothing? This is a democracy!”

Nominally, that is true. Hong Kong still enjoys the democratic rights and freedoms enshrined in the Basic Law, including the right to assemble, the rule of law, free speech and universal suffrage. However, Emily Lau, a Hong Kong legislator who has come out strongly in favor of Occupy Central, expresses the common fear that these privileges may be evaporating.

“Compared to mainland China, this is Disneyland — but the question is for how long?” she says. According to Lau, the legal avenues for voter reform are about to be exhausted. “The thing is: What else can we do? People want reform, not revolution, but we’ve held so many rallies and marches. I know [Occupy Central] is effective because [the idea of it] has upset so many.”

At the same time, many doubt that ordinary Hong Kongers — much like ordinary people anywhere — will commit an act of civil disobedience for the sake of an electoral principle. A poll in October showed that only 25 % supported the Occupy Central movement, and much has been made over the fact that the three options put forward to the public at the referendum were selected from a broader group of proposals by just 2,500 core activists.

At the polling station in Hong Kong University, voters expressed their support for the sit-in, while hesitating over whether they would participate themselves. For Mary Cheung, the referendum itself was a powerful message. “The government may cover their ears and eyes,” she says, “but this is like a fire —they can’t get away from the smell.” That’s true. But fires can get extinguished — sometimes rapidly. 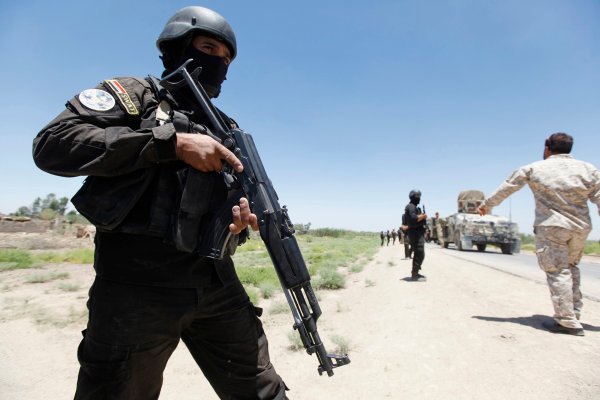 The First U.S. Special Forces Have Arrived in Baghdad
Next Up: Editor's Pick