What a Muslim American Learned from Zionists

How probable is it to get ardent Zionists and pro-Palestinians to not just talk to one another, but love and respect one another? Not likely. That’s why the Shalom Hartman Institute launched a controversial but groundbreaking program to bring American Muslim thought and civic leaders to Jerusalem for a year-long fellowship. For many, the program was a hard sell given sensitivities and loyalties on both sides of the Israeli-Palestinian conflict.

I hesitated joining because Hartman is an unapologetically Zionist institution and, like all the participants, I have been committed to the Palestinian cause throughout my life. Other than posing an ethical dilemma, it also required putting our credibility with the Muslim community on the line and opening dialogue with Zionists, a thought once an anathema to our sensibilities.

Zionism is a toxic word in the pro-Palestinian community; it stands for an opportunistic land-grab in the wake of the Holocaust from people who had nothing to do with that tragedy. To us, it stands for the nakba, a catastrophe, for the Palestinian people. It stands for an ethnic cleansing, a brutal occupation, militarized neighborhoods, checkpoints, political prisoners, daily humiliation, blockades, collective punishment, stolen resources. I have always been proudly anti-Zionist.

Through the fellowship I learned that Zionism means something very different for Jews. The Jewish people’s longing of thousands of years for a homeland, a return from exile, a sanctuary from being a hated minority in the diaspora, an opportunity to establish Jewish values and honor God, a Biblical promise, a chance for redemption. As someone with years of interfaith experience I should have known all this, but I didn’t. For this, I blame both the exhaustive use (and some Israelis say abuse) of the Holocaust narrative from Zionists to win over Western populations, and also because in the U.S., interfaith work means talking about everything except Zionism and the Israeli-Palestinian conflict. It shows the deep flaws in current interfaith models when the most burning issue remains unspoken.

But it did not remain unspoken in our program. As we learned and gained appreciation for the Biblical connection of the Holy Land to the Israeli people, the Palestinians remained at the forefront of our consciousness. In every session, dozens of times daily, we have pushed on the Palestinian issue. While we were challenged on our understanding of Zionism and the history of Jews and Israel, we challenged our professors from legal, historic, faith, human rights and national security perspectives to justify the treatment of Palestinians.

It was a frustrating cycle in which the conversation often ended at a version of one thought: “Most Israelis want to end the occupation but are afraid to.” Initially, this perpetual fear seemed like either an excuse or a deep collective pathology divorced from reality. It wasn’t until I met numerous Palestinians that I realized the fear many Israeli Jews have is not a figment of the imagination.

The despair and anger of a burgeoning population of young, unemployed, restricted, dislocated population which carries with it the pain of generations and assumes an apocalyptic end is real. We personally witnessed hundreds of Muslim men denied access to the Al-Aqsa mosque for Friday prayers, and their quiet rage, and even tears, at the young Israeli security personnel who blocked the entrances and themselves seemed scared and unsure. This pressure cooker cannot hold indefinitely.

Despite living on the front lives of this conflict, many Jewish friends at Hartman said it took the relationships built through the program for our Jewish friends to fully absorb the Palestinian narrative.

After a year we built the trust necessary for a needed exchange of admissions. The Muslim fellows understood Jewish fear and the Jews’ deep desire for a homeland after thousands of years of being a mistrusted minority. And Israeli Jews affirmed to us the daily devastation of the occupation and the shattering of Palestinians through which Israel was born. These exchanges between Zionists and pro-Palestinians were monumental.

They are also an affirmation that there is still hope for dialogue and relationships that can actually make a difference. Until now, both parties have been speaking inside their own bubbles, safe in dialogue with people that agree with them. The walls have been built so high that breaching them to reach out to the other side is tantamount to treason. Hartman and the participants both took huge risks in being part of this program with hopes to forge a new way forward. This fellowship proves that building relationships between people who fundamentally disagree can uncover empathy and mutual recognition that despite differences, everyone deserves dignity, security, prosperity and self-determination.

Rabia Chaudry is a fellow of the Truman National Security Project and the New America Foundation. 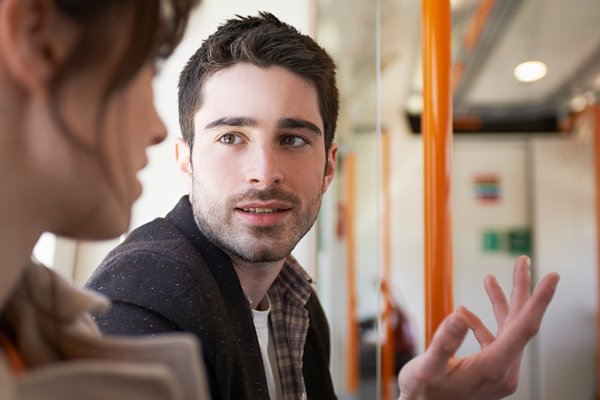 5 Secrets That Will Help You Master Conversation Skills
Next Up: Editor's Pick