Chelsea Clinton host from STEM to success: A No Ceilings Conversation at the Denver Museum of Nature and Science Planetarium, June 23, 2014. T
RJ Sangosti—Denver Post via Getty Images
By Eliana Dockterman

“In my math and science classes, the teachers usually always picked boys to answer questions, which really bugged me because I knew the answers,” a Colorado student told Chelsea Clinton and an all-female panel during a discussion about getting girls interested in STEM (science, technology, engineering and math) on Monday.

In 1984, 37% of computer-science degrees went to women. Now only 12% of computer science graduates are women. This divide explains why the Clinton Foundation’s No Ceilings initiative wants to find a solution to one of the largest remaining gender gaps in America. “We’re looking from 1995 until 2015 as to where women and girls have gained in terms of rights and opportunities around the world and in the United States and where gaps still persist. And STEM around the world but acutely here in the U.S. is an area where not only the gap remains but the gap has widened in the last 20 years,” Clinton told TIME.

In an effort to encourage girls, Clinton hosted From STEM to Success: A No Ceilings Conversation on Monday in Denver, Colo. The panel was moderated by Kari Byron, co-host of Mythbusters, and included Debbie Sterling, creator of GoldieBlox—an engineering toy for girls—and Danielle Feinberg, director of photography and lighting at Pixar. The women spoke about their individual struggles and how the culture and school system needs to change to support women interested in math and science.

“As we heard in the event this morning, so many girls in high school and college who are in computer science or STEM more broadly continue to be treated very differently than their boy or young men colleagues,” says Clinton. “Their successes aren’t celebrated at the same level, that they’re often criticized for what they’re wearing instead of their code being engaged with seriously.”

Until schools reform on a national level, organizations are building after-school programs to try to engage girls in STEM. The Clinton Foundation has partnered with Google on its Made With Code project, which recently pledged $50 million to close the tech gender gap. Part of what Made with Code aims to do is give girls female role models in STEM, so girls can see engineering or computer science as a realistic career path.

Feinberg, who serves as one of those mentors, spoke on Monday about how she felt excluded from the boys’ club in high school and college. “I would be in the science lab programming late at night and the guys would all get together and they would figure out all the secrets to the assignments,” she said. “They wouldn’t share and, if I went over to ask a simple question, they would ignore me.”

Girls at the event agreed that social pressure was another major factor in their decisions to opt out of STEM in high school. “There’s a lot of boys in our school who if they see a girl doing sciencey stuff they judge you and call you a nerd and stuff. It’s totally fine for the boys, but people judge you for being a girl who likes science,” one young student shared.

Girls said that one way they overcame such obstacles was by finding female peers with similar interests. That’s why Made With Code also aims to give girls the resources to find camps and programs where girls can build communities of support. “It’s so important that girls and young women have peer support—even if enabled by social media—to recognize that all those criticisms aren’t about them, they’re about the critics,” says Clinton. “They’re about the young man who feels threatened by the success of the young woman in his classroom.” 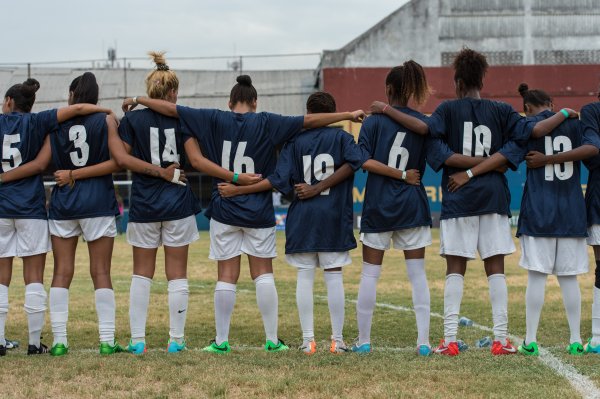 Title lX: How a Good Law Went Terribly Wrong
Next Up: Editor's Pick