Slapping Can Be Beautiful Too: A Cheeky Response To The 'First Kiss' Video

You might remember the viral “First Kiss” video that purported to show 20 strangers kissing for the first time. It was called beautiful, inspiring and a host of other very complimentary adjectives. Though that clip didn’t exactly turn out to be a hoax, the video was shot using actors, models and musicians, and was an advertisement for clothing company WREN. Three months later, we have a new parody of that viral hit: The Slap.

Max Landis, writer of Chronicle and son of Blues Brothers director John Landis, got a few dozen folks — some of them actors and models — together (most notably a bearded Haley Joel Osment of The Sixth Sense fame) and had them slap one another in the face. The slaps aren’t particularly vicious, but if the sounds they produce are any indication, they’re not exactly love taps either.

The “Slap” video — using the same black-and-white color scheme and upbeat music — is oddly adorable and everyone appears to be in remarkably good spirits, relative to the typical atmosphere when people are being repeatedly slapped in the face (though you could hardly be blamed if you cringed on the occasions when some of the men in the video struck the women). Now the only question is what the parody response to this parody will be. 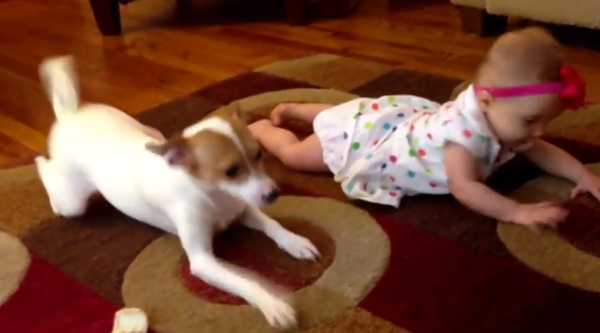 Incredibly Helpful Dog Teaches Baby How to Crawl
Next Up: Editor's Pick