An aging insider, a firebrand insurgent, a mysterious break-in and illicit photographs. If John Grisham wrote a Southern potboiler to illustrate the battle waging over the soul of the Republican Party, the storyline might look like this year’s Mississippi GOP’s Senate primary, which ends in a runoff on Tuesday.

The 76-year-old six-term incumbent Senator Thad Cochran, who comfortably won re-election virtually uncontested for decades, has been brought to his knees by conservative former talk-radio host and state senator Chris McDaniel, a 41-year-old relative political neophyte with a penchant for blistering rhetoric.

In the closing weeks of the campaign leading up to and following the June 3 primary, which led to Tuesday’s runoff after neither man secured more than half the vote, the campaigns took a particularly nasty turn. Four men, including a local Tea Party official, were caught taking pictures of Senator Cochran’s wife Rose, who lives with dementia in a nursing home. The pictures were reportedly used in a video that accuses Cochran of marital infidelity. Then Cochran released a negative ad tying the men, without hard evidence, to McDaniel’s campaign, which McDaniel called “shameless” in his own ads. In the early morning June 4, after election night, McDaniel supporters were found locked in the courthouse in Jackson for reasons that remain unclear.

That the campaign took a turn for the weird shouldn’t be especially surprising, considering what’s at stake.

After failing to knock off incumbent Republicans in a string of early primaries, Tea Party supporters pointed to the stunning defeat of Majority Leader Eric Cantor in Virginia’s 7th District as evidence that they’re still in the game. But insurgent Dave Brat’s victory in that race was shocking partly because so few people were paying attention. Not a few observers blamed Cantor’s loss largely on his personal unpopularity at home.

Contrast that with the closely watched and fiercely contested battle for Cochran’s seat. Ever since McDaniel eked out a victory over Cochran in Round 1 of the primary, the race has become a blockbuster political event. This has not been a campaign of nuance and split hairs but an ideologically clear divide between an old-school political operator who has served his state and curried favor by dipping freely into the federal treasury and an opponent openly and aggressively opposed to exactly that brand of politics.

McDaniel supporters hammered Cochran as the “King of Pork” for his success at finagling federal dollars for cash-strapped Mississippi — and Cochran accepted the charge with pride, betting that residents of a state that receives more federal largesse per tax dollar than most would reward him for bringing home the bacon.

“What is one man’s definition of pork is another man’s definition of progress,” says Hayes Dent, a Republican political strategist in the state who volunteered with the Cochran campaign after the June 3 debacle. But clearly Cochran’s pork bet hasn’t paid out as he’d have liked. “It’s an anti-D.C. mood, and that certainly does not work in the favor of a guy like Thad Cochran.”

Democrats Urged Not to Save a Mississippi Republican

The race has the feel of an Alamo moment for the Republican establishment, which has poured $5.8 million in outside cash into Cochran’s campaign while outside groups have raised $5.7 million for McDaniel. The septuagenarian Cochran is a politician of the old school if ever there was one, and if the Tea Party helps topple him it will have unambiguously achieved what it tried to claim credit for after Cantor’s loss.

The fallout of this primary could end up being bad for the party, no matter who wins. After a bruising election that will leave whoever emerges weakened in the general election, Mississippi Democrats are looking to pounce in what could be the first competitive U.S. Senate election in the state in decades, when Democratic candidate and former Mississippi Congressman Travis Childers faces the Republican in November. “I’m scared to death that we’ll lose this in the fall,” Dent says. 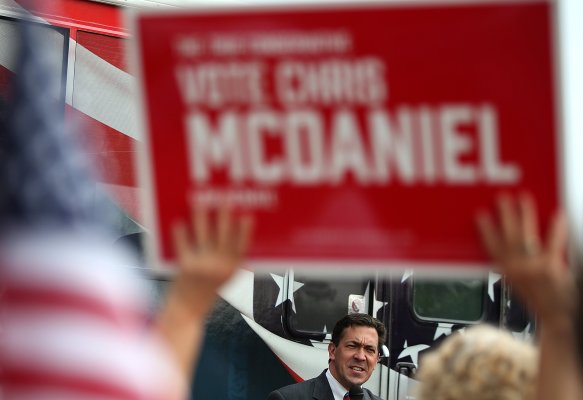 Democrats Urged Not to Save a Mississippi Republican
EDIT POST