President Barack Obama announced executive actions Monday that would give federal employees more flexibility to take time off to care for their families.

During a White House Summit on Working Families, Obama said it was time for business leaders and lawmakers to create work environments that respect employees’ lives outside the office. “Twenty-first century families deserve 21st-century workplaces,” Obama said Monday afternoon. “Our economy demands them because its going to help us compete.”

Obama accused Congress on stalling on policies that would benefit working families, and the executive actions he took Monday, while not far reaching, were his latest attempt to work around Capitol Hill in a midterm election year. Obama instructed government agencies to provide workers with the flexibility to take time off to care for sick family members, to take breaks to nurse, and to telecommute when necessary without running the risk of punishment.

“Many women can’t even get a paid day off to give birth,” Obama said . “That’s a pretty low bar.”

At the summit, business leaders and Democrats gathered to discuss policies that could benefit American workers, with CEOs from Johnson & Johnson and Goldman Sachs scheduled to appear alongside the President, First Lady Michelle Obama, Vice President Joe Biden and Dr. Jill Biden. Democrats spent the day touting policies that have helped them maintain an advantage with women voters, but Obama said Monday that workplace issues—from workplace flexibility to raising the minimum wage—should not be thought of as issues that solely impact women.

More than 40% of mothers are the sole or primary breadwinners, and yet still make on average 77 cents for every dollar earned by their male counterparts, according to a U.S. Council of Economic Advisors report released ahead of the summit (conservatives have called the 77-cents figure misleading). Men, however, are spending more time as caregivers than ever before.

Republicans dismissed the summit as a political ploy for women voters ahead of the midterm elections.

“It’s unfortunate that President Obama and the Democrats see women only as an electoral opportunity,” Republican National Committee spokeswoman Kirsten Kukowski said in a statement. “How do we know this? President Obama could have held a bill signing ceremony instead of a politically-minded summit if he and Harry Reid would act on legislation to help working families that is being held up in the Senate.” 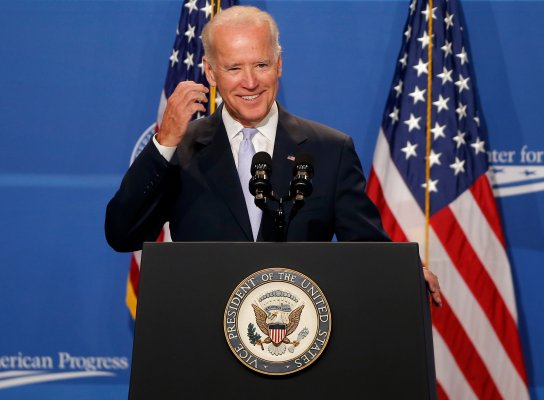 Joe Biden Gets Humble About His Wealth
Next Up: Editor's Pick