REVIEW: FX's Tyrant Is Its Own Downfall

The best thing I can say about FX’s Tyrant (Tuesdays on FX, premiering June 24) is that the timing is right. The series, in which the estranged son of a Middle Eastern dictator returns to his homeland from a life in the States, comes as the region and the rest of the world try to figure out how its countries can have peace, prosperity and liberty at the same time. Egypt’s Arab Spring attempt at democracy ended in a military coup. Syria’s brutal dictatorship is hanging on in a catastrophic civil war. And Iraq, a decade after one of its own despots was removed by a U.S. invasion, is falling into chaos. In Tyrant, the elderly dictator of fictional Abbudin scoffs at the ingrates in his populace who demand freedom: “Freedom to do what? Kill each other? I give them order and prosperity and all they want is chaos.”

TV could use a good series about these questions. Tyrant is not that series.

On paper, it could be, with a premise designed to give U.S. viewers entree to a part of the world that TV has portrayed more as a problem than a place. Bassam “Barry” Al-Fayeed (Adam Rayner), after two decades as a pediatrician in Pasadena, brings his wife, Molly (Jennifer Finnigan) and two children back to his homeland of Abbudin for the wedding of his nephew. (The fictional Abbudin’s flag is essentially Syria’s with one extra star, and the likenesses between the Al-Fayeed and Assad dynasties are similarly close.)

Barry’s Anglicized name is a good indication of how little attached he is to his father–to the extent that he insists on sitting in the coach seats he pays for when Dad charters an entire jetliner for him and his family. His family, especially teen son Sammy (Noah Silver), are more impressed by the visit, partly because they’re less aware of what the family business is built on; they marvel at the open roads on their limo drive to the presidential palace, for instance, unaware that the authorities have halted traffic just for them. Barry, on the other hand, can’t wait to do his filial duty and leave–until a catastrophe forces him to choose between staying, and becoming Bassam again, or leaving and possibly letting the country fall into deadly chaos.

The show, whose producers include Howard Gordon of 24 and Homeland, was beset before it even started by production headaches and controversies–among them, the casting of non-Arab Rayner in the lead role. But though his Barry is a bit of a stiff, Rayner among the least of the show’s problems. There’s not a fleshed-out character in the show, beginning with Barry’s stock-villainous brother Jamal (Ashraf Barhom), who we immediately meet raping a subject with her own husband and children still in her house. To a person, the characters are types: the shallow American kids, the dissolute playboys, the noble protesters and journalists, the cynical advisers, sneering elites and sad-eyed children. The problem isn’t that Tyrant portrays a troubled region as troubled; it’s that it doesn’t use its time to begin to make this world as real as ours.

The plot in the early episodes drags because it turns on a question–will Barry and his family stay?–that has to be answered “Yes” or you have no show. A series with a strong foundation of writing and character could get past that. But Tyrant simply lurches around, welding terror-thriller hyperviolence to rote political intrigue to telenovela rich-family dysfunction. And if Tyrant is meant to expand on the portrayals of the Middle Easterners peripheral to stories like 24, it fails badly. If anything, those shows do better by the setting, if only because the Abbudinites are central to Tyrant, yet feel like bit players in their own story, there to sneer, suffer and read ridiculous dialogue. (“You’re offending Allah,” a rebel leader says when a woman removes her head covering alluringly. She: “But am I offending you?” Only dramatically!)

Early on, Tyrant makes a production choice that symbolizes about the series’ limitations overall. Although it’s a story about a culture clash–Barry and his American-raised family adjusting (or re-adjusting) to life in Abbudin–the dialogue is entirely in English. Just few years ago, this would not have been noteworthy on American TV. But FX has two successful shows, The Americans and The Bridge (returning next month), that are richly culturally specific–and are largely written in Russian and Spanish respectively.

Now, you could argue that Tyrant would require much more subtitling, but it would not only make sense for native characters to speak English in scenes with Barry and his family, it would add complexity and underscore the way his character has to straddle two worlds. And having “Arabic speaking” characters speak to each other in heavily accented, sometimes stilted English–even a presidential address is shown transmitted across the country in English–alienates the Middle Eastern characters from the audience, rendering them as Other in a story that’s supposed to take place on their own turf.

In other words, Tyrant chooses simple over complex, over and over, in different ways. It’s a shame, because there are the rudiments of rich conflicts here: for instance, whether Barry/Bassam–by arguing to his ruling family for openness and against ugly crackdowns–is really improving things or just helping his clan run a more p.r.-savvy dictatorship. Another potential conflict–Sammy is gay, but embracing being “royalty” in a homophobic society–goes nowhere interesting in the first four episodes. In the end, there’s nothing in the show’s flat, melodramatic depiction of its world you couldn’t have predicted from watching a few world-news segments, Homeland, and a little Dynasty. It promises to explore another world, but instead it’s like a tour from inside a speeding limo, the air-conditioning blasting, the tinted windows rolled up. 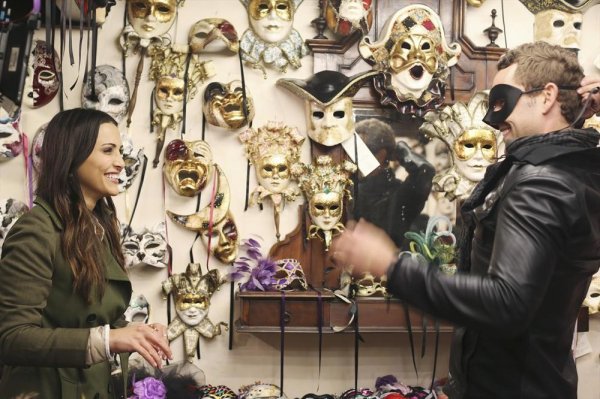 RECAP: The Bachelorette Watch: Italian Cheese and Whine
Next Up: Editor's Pick