The White House declined to rule out an eventual breakup of Iraq on Monday, as Sunni extremists in the war-torn country continue to make gains on the road to Baghdad.

With fighters from the militant group Islamic State of Iraq and Greater Syria (ISIS) seizing more territory, White House press secretary Josh Earnest said it’s up to the Iraqi people to decide how their maps should be drawn, adding that the Obama Administration believes the best course would be for Iraq’s political leaders to come together to find a political solution.

“I’m not going to be in a position to offer a proposal for how they should draw up their map,” Earnest said Monday when asked about a 2006 proposal by then-Senator Joe Biden to partition Iraq into Sunni, Shi‘ite and Kurdish states. “The most direct way for — in the view of this Administration — for Iraq to confront the threat that they face from [ISIS] is to unite that country around a political agenda that gives every single citizen a stake in that country’s future and that country’s success.”

When asked about this week’s TIME cover story, “The End of Iraq,” Earnest acknowledged that partition is hardly a new concept. “But I think that we have also seen the danger of trying to impose solutions from the outside about what anyone thinks is in the best interests of the Iraqi people,” he said.

“It is the view of this Administration that the best way for us to confront this challenge is to empower the Iraqi people to make the kinds of decisions that demonstrate their vested interest in the success of that country, and that starts by having political leadership, elected political leadership, that ensures that the rights and interests and aspirations of every Iraqi citizen is incorporated into their governing agenda,” Earnest added. “That’s not an easy thing to do. I don’t want to paper over that. But it is critical to the success of that country.” 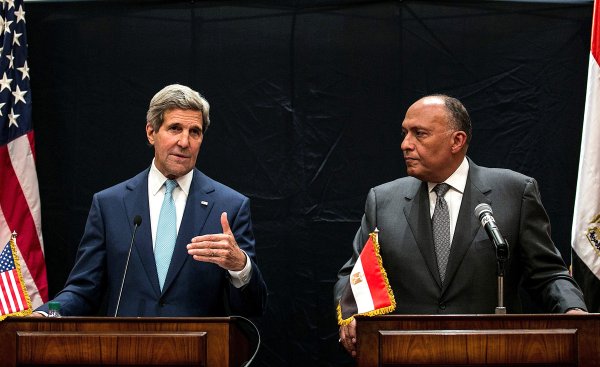 U.S. Will Work With Not Against al-Sisi
Next Up: Editor's Pick