Frances Bean Cobain never got to know her father, Kurt Cobain, because the Nirvana frontman killed himself at age 27, when Cobain wasn’t even two years old. No wonder Cobain doesn’t appreciate Lana Del Rey making a death wish in a recent interview in The Guardian and on her new album, Ultraviolence.

In The Guardian profile of Del Rey, the singer says she saw glamour in an early death. “I wish I was dead already,” she reportedly said. When the interviewer expressed concern, she responded, “I do! I don’t want to have to keep doing this. But I am.”

Yesterday, Cobain took to Twitter to remind her followers that “the death of young musicians isn’t something to romanticize.

“I’ll never know my father because he died young and it becomes a desirable feat because people like you think it’s ‘cool,’” she tweeted. “Well, it’s f**king not. Embrace life, because you only get one life.” She also directly tweeted Del Rey saying, “ur too talented to waste it away.”

Cobain followed her comments by noting that she was not attacking Del Rey, but simply “trying to put things in perspective from personal experience.” She later deleted the tweets, but Pitchfork has screen shots of them.

Del Rey has since backed away from the statement she gave to The Guardian, saying it was taken out of context. She tweeted, “i regret trusting the guardian,” as MTV points out. The author of the article, Tim Jonze, wrote an essay repudiating Del Rey’s claims, noting that she named her debut album Born to Die and “had spent much of the 50 minutes previous to this point telling me how miserable she was.” To further prove his point, he included audio of Del Rey’s quotes.

As seems to be the norm, Del Rey’s tweets on the subject were later deleted. 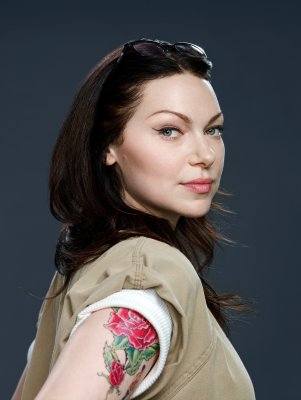 Laura Prepon Will Be in Every Orange Is The New Black Episode Next Season
Next Up: Editor's Pick