Oil Is The New Gold: Inside North Dakota's Oil Rush

An oil derrick is seen at a fracking site for extracting oil outside of Williston, North Dakota March 11, 2013.
Shannon Stapleton—Reuters
By Tessa Berenson

North Dakota is now producing more than one million barrels of oil a day, part of a modern gold rush that holds both promise and uncertainty for the future of the state.

Oil production statistics released by the state’s Department of Mineral Resources (DMR) revealed that the state produced 1,002,445 barrels per day in April 2014, up from 793,832 the year before. The new statistics mean that North Dakota now joins the ranks of Texas, Alaska, California and Louisiana- the only states to ever generate more than one million barrels per day. (Texas is the only other one still producing that amount.)

North Dakota expects its production to climb: the DMR predicts oil production to peak at 1.5 million barrels per day around 2017.

This tracks a broader, national trend, as well: This year U.S. oil field production outpaced imports by about one million barrels a day.

Just five years ago, North Dakota was producing less than 200,000 barrels a day. Alison Ritter, public information officer for the oil and gas division of the DMR, traces the beginning of the oil boom to the 2006 discovery of the Parshall Oil Field on the Bakken formation, the oil-rich shale rock material under the western part of the state. Using a combination of horizontal drilling and hydraulic fracturing, commonly called “fracking,” workers initially extracted an impressive 463 barrels a day from the discovery well. “It wasn’t the first time this was used [in North Dakota],” Ritter says of the drilling strategy, “But it was the first time it was used well.”

Since then, North Dakota’s economy has exploded. The state now has the fastest growing economy in the U.S. and the lowest unemployment rate: 2.6% compared to a national average of 6.3%, according to the National Bureau of Labor Statistics. The number is well below that in Williston, the town at the heart of the oil rush, which has an unemployment rate of less than 1%.

People eager to cash in on the boom have been flocking to Williston for years; the town’s population has doubled since 2010. Housing prices are skyrocketing, and construction is struggling to keep pace with the population. In the first quarter of 2013, Williston issued nearly $72 million in building permits, more than twice the amount during the same period of 2012.

Incomes in the town match the rising real estate prices- in 2014, Walmart hired entry-level workers in Williston at a staggering $17.40 per hour to compete with the salaries people can fetch on the oil fields.

“In some ways we would have had more trouble with this had the national economy been good when this started,” says Tom Rolfstad, executive director of Williston Economic Development. “We’ve benefitted. Going into this we were worried about where we were going to get workers… but because of the national recession, we have workers coming from everywhere and we have investors coming in from everywhere looking to invest.”

Yet the steady stream of hopeful workers into the small town means that, even with high wages, many are stuck living temporary housing facilities sprouting up in the Bakken oil region while they wait for more permanent housing to be built.

“They’re not as bad as people think,” Rolfstad says of the facilities, often called man camps. “They’re more like a college dormitory. But we realize that this is going to be a long-term proposition, so we’re more about trying to do things permanently than temporarily. We’re really trying to build a city that has quality and not just quantity.”

North Dakota also needs to expand refining facilities to accommodate the flood of oil. The state currently has only one refinery, capable of refining 68,000 barrels a day. Though two more refineries are in the works, for now most of the oil is shipped via railway and pipeline to other refineries south and east of the state.

But with all the excitement of new growth comes downsides, as well. Williston schools are overcrowded and emergency services are strained. Meanwhile, the character of the town and the state are changing. “When you go to a restaurant now, you might wait in line to get in and wait in line again to pay,” says Rolfstad. “These are big city things we’ve never experienced before.” 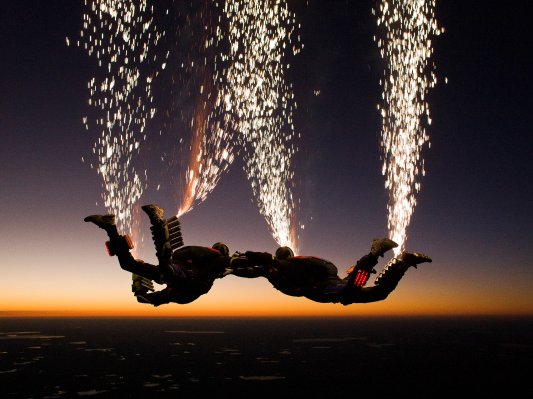 Skydivers Create Stunning Light Show By Strapping Fireworks to Themselves
Next Up: Editor's Pick