The last batch of Syria’s identified chemical weapons was removed from the country on Monday, the latest step in an unprecedented program that began just 9 months ago.

Director-General of the Organization for the Prohibition of Chemical Weapons (OPCW) Ahmet Üzümcü made the announcement from The Hague in the Netherlands.

“Never before has an entire arsenal of a category of weapons of mass destruction been removed from a country experiencing a state of internal armed conflict,” said Üzümcü. “And this has been accomplished within very demanding and tight timeframes.”

The OPCW program has been a collective effort between 30 different countries, each helping to provide needed equipment and transportation to facilitate the destruction of Syria’s stockpile of arms.

John Kerry paid tribute to the work done by OPCW to rid Syria of chemical weapons after the death of over 1,000 in an August 2013 attack.

“It’s very important, however, even as we mark this moment of removing 100 percent of the declared weapons, that we understand that our work is not finished to ensure the complete elimination of Syria’s chemical weapons program. There are still some serious issues that remain to be addressed, and we are not going to stop until those have been addressed.”

Now, the chemical weapons must be safely delivered for destruction on board the U.S. vessel Cape Ray and at commercial facilities in Finland, Germany, the United Kingdom and the United States. 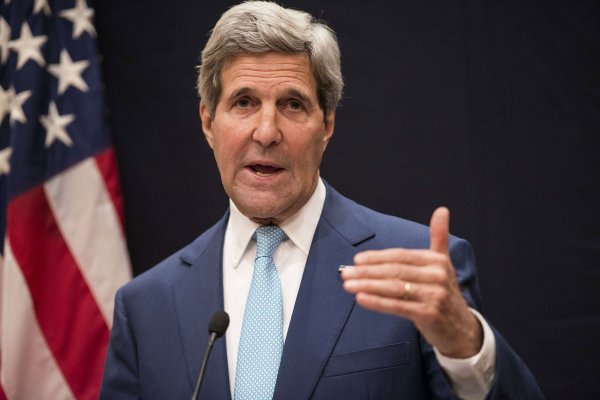 Kerry: We May Have to Strike
Next Up: Editor's Pick