Last-Minute Header Salvages 2-2 Draw for Portugal Against the U.S.

It’s a cruel game all right. Had Michael Bradley acted like a rank amateur and just whacked the ball anywhere to kill precious seconds in the last minute of the game, the U.S. would have won 2-1 and advanced to the knockout stages of the World Cup. Instead, with 94 minutes elapsed, Bradley tried to control a bouncing ball 12 yards into Portugal’s half, like any pro would do. He was pushed off the ball, lost possession, and one pass later Cristiano Ronaldo had possession. The world’s best player had been a spectator the entire game, but at this moment he showed his class, firing a perfect cross to Silvestre Varela, a late sub, who headed home at 94:34 to save Portugal’s tournament.

It would have been a crushing defeat if not for the fact that it was a crushing 2-2 draw. American hopes of advancing are still alive and well, but dropping those extra two points that would have come with the win could still be fatal. “You’ve got to look at the positives,” said striker Clint Dempsey, who scored the second U.S. goal, after the game. “We put in a good performance.” The Americans rebounded from a calamitous start, going down 1-0 five minutes into the contest after Geoff Cameron shinned a clearance that went backward and landed on the foot of Nani 4 yards from goal. The net gaped like an ocean in front of him. 1-0 Portugal.

But the U.S. was quickly able to mount attack after attack on the Portugal defense, particularly on the right flank, where Fabian Johnson made menacing runs all night. In the 55th minute, he ran onto a pass from Graham Zusi that put him behind Portugal’s back line, and his pass to the onrushing Bradley was perfect. So was Bradley’s contact with the ball, but with the keeper beaten Portuguese defender Ricardo Costa stopped a sure goal by sticking out his knee to block the shot.

But there would be no stopping Jermaine Jones’ spectacular strike from outside the box to level the match in the 64th minute. The 32-year-old gathered a clearance off a corner kick and hit a vicious right-footed bender. Portugal goalie Beto leaned left but then stopped, as if to say, “I don’t have a prayer.” He didn’t. Then Dempsey, who had been threatening the Portuguese goal all night, took the lead with his navel in the 81st minute. He bundled in a Zusi pass after the midfielder had gathered a rebound from a Bradley shot after yet another foray down the right wing.

It looked like the perfect performance. But the growing number of U.S. soccer fans will dwell on those last 60 seconds. Television announcers indicated that four minutes would be added to the clock — hardly excessive injury time. But then the U.S made a final substitution, Omar Gonzalez for Zusi, and the fourth official held up the signboard indicating that five minutes had been added on. Again, unremarkable stuff, but that extra minute would exact a price.

The draw means that everyone is alive in the topsy-turvy Group G, which will all be decided on Thursday when the U.S. plays Germany and Portugal plays Ghana. Losers go home. “We have a lot of confidence to beat Germany,” said U.S. coach Jürgen Klinsmann in the postgame press conference. “I’m actually pretty confident that we are going to have a good game.”

Intriguingly, a draw between the U.S. and Germany figures to get both teams through to the knockout round. So would a draw between Ghana and Portugal. That led to a press conference question as to whether Klinsmann, who coached Germany in the 2006 World Cup, and won the trophy as a German player in 1990, would be discussing the situation with his friend, former assistant and current German coach Joachim Loew. “Jogi’s doing his job, and I’m doing my job,” said Klinsmann. “He’s a good friend. But there’s no time for friendship calls, it’s about business now.” Is it ever. 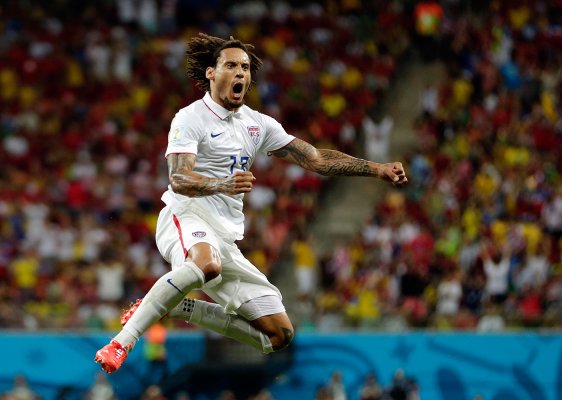 U.S. vs Portugal In Pictures
Next Up: Editor's Pick