What's the Pentagon Endgame in Iraq?

Iraq has become a sucking chest wound, and the U.S. military is showing up like a doctor who left his black bag back at the hospital. On purpose.

The U.S. military doesn’t want to go back into Iraq. The U.S. public doesn’t want the U.S. military to go back there. Yet Iraq’s U.S.-succored corrupt and sectarian government is losing whatever tentative grip it once had across western Iraq, forcing President Obama to dispatch just enough military force to the region so no one can say he’s doing nothing to salvage the 4,486 lives and $1 trillion Washington spent replacing Saddam Hussein with Nouri al-Maliki.

But 300 U.S. military advisers, along with a small fleet of warships and aircraft in the region, are unlikely to turn the tide on their own without major political changes and some form of reconciliation. “This is not just some small militant group against the Iraqi government,” says Stephen Biddle of the Council on Foreign Relations, who has advised the Pentagon on Iraq. “This is essentially Sunnis against Shi‘a.”

Fighters from the Sunni-backed Islamic State of Iraq and Greater Syria (ISIS) made additional gains Sunday, taking three towns in western Iraq’s Anbar province as they continue to push toward Baghdad and the creation of an Islamic state straddling the border drawn by British and French colonial rulers nearly a century ago between the two nations.

Meanwhile, the U.S. has dispatched warships to the Persian Gulf and readied warplanes already in the region if the U.S. decided it needs to help keep ISIS out of Baghdad. Doing so will be viewed by Sunni loyalists — including ISIS and former members of Saddam’s army, some of which are allied with ISIS — as a declaration by Washington to align itself with al-Maliki’s Shi‘ite-heavy government and its key backer, Iran.

“There are an awful lot of movements that they are making that are targetable,” says Anthony Cordesman, a military analyst with the Center for Strategic and International Studies. “They have to be able to move between cities to expand, they have to have supply lines. We don’t have to conduct urban bombing to deal with the expansion of this movement.”

Time, Obama suggested Sunday, may be the best military option. “The thing about an organization like this is that, typically, when they control territory, because they’re so violent, because they’re so extreme, over time, the local populations reject them,” President Obama said on CBS’s Face the Nation. “We have seen that time and time again. We saw it during the Iraq war in places like Anbar province, where Sunni tribes suddenly turned against them because of their extreme ideology.”

But Republicans are in no mood to wait. ISIS wants “to launch attacks in the exterior, external operations, including targeting our homeland,” Senator Marco Rubio, R-Fla., told CBS. “This is an extremely serious national security risk for the country if they were to establish that safe haven of operation.”

Rubio wants the Administration “to draw up plans that allow us to begin to degrade their supply lines and their ability to continue to move forward,” which is what Pentagon officials have been doing. “We’ve got to figure out a way to isolate ISIS from Syria and Iraq, isolate them from each other,” he said. “And then, look. I’d leave the rest to military tacticians.”

Former Vice President Dick Cheney derided the current debate over the wisdom of Obama’s decision to dispatch 300 military advisers, to help Baghdad’s military by providing intelligence for counter-offensives and targeting information for U.S. warplanes and drones. “When we’re arguing over 300 advisers, when the request had been for 20,000 in order to do the job right, I’m not sure we’ve really addressed the problem,” he said on ABC’s This Week, referring to the Pentagon’s original request to keep a substantial residual force in Iraq after 2011. Instead, the U.S. pulled all its troops out after the Iraqi parliament failed to grant legal immunity to them; Republicans maintain the Obama Administration should have pushed harder for such legal protection.

He argued that the U.S. needs to take a broader approach to dealing with al-Qaeda and its offshoots like ISIS. “At this point there are no good, easy answers in Iraq,” he said. “We need an Administration to recognize the fact that we’ve got this huge problem, quit peddling the notion that they got core al-Qaeda and therefore there’s no problem out there.”

ISIS’s near-term goal is Baghdad. Like 1968’s Tet offensive launched by North Vietnam again South Vietnam, it doesn’t need to occupy the capital in order to achieve a symbolic victory. While North Vietnam didn’t prevail in Tet, the fact that it was able to attack Saigon left the taste of defeat in the South. Similarly, barraging Baghdad’s Green Zone, the heart of the Iraqi government, could be seen as a death knell for al-Maliki’s government.

“It is not at all clear that without direct American assistance, particularly airpower, that the Iraqi government is going to be able to hold,” says retired Army officer and Iraq vet John Nagl. “We could see Saigon 1975 in Baghdad 2014.” 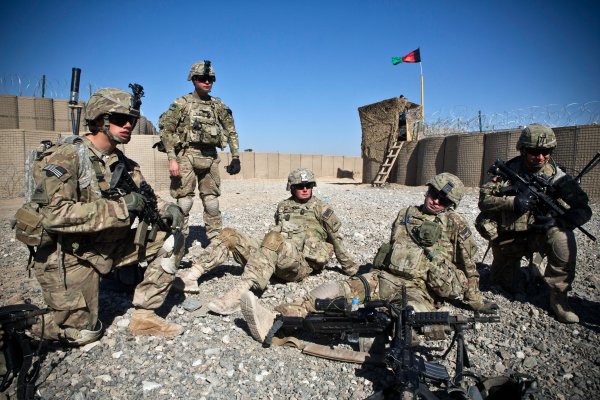 U.S. Has No Idea if PTSD Care Is Working
Next Up: Editor's Pick