Does Elvis Presley’s sweat cure the common cold? If it’s caked into a 40-year-old smudged piece of white fabric, does Elvis sweat turn lead into gold, water to wine?

Once in a, ahem, blue moon, some incredible memorabilia rolls through town and shakes up the collectors’ world. A Sotheby’s auction Tuesday is one of those incredible events.

One of the items on sale is a special suit owned by Elvis Presley—that’s the King of Pop to you—that the aging star wore during his Las Vegas performances. Likely to fetch between $100,000 and $200,000, the suit has a green and blue peacock rendered in rhinestones and gold lame on the front and back, CNBC reports. As everyone knows, a bejeweled white jump suit is a nightmare to wash, so it still has Elvis Sweat Stains™ in the armpits.

Other items include Bob Dylan’s original handwritten lyrics to “Like A Rolling Stone,” corrections and all, which could sell for up to $2 million, and John Lennon’s piano, which was also played by Elton John and David Bowie and could go for $100,000 to $200,000. Also, there are some John Lennon drawings, and Jim Morrison’s Love Her Madly lyrics.

Rock fans, come one, come all. 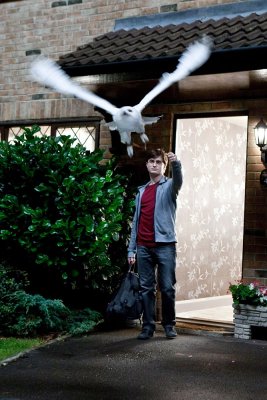 Harry Potter Shows No Allegiance to His Owl
Next Up: Editor's Pick