Iraq’s top Shi’ite spiritual leader called Friday for a new “effective” government, increasing the pressure on Prime Minister Nouri al-Maliki as he tries to beat back an assault by Sunni militants in northern Iraq.

Grand Ayatollah Ali al-Sistani made the comments at Friday prayers a day after President Barack Obama said he would deploy military advisers and called on Maliki, a Shi‘ite in office since 2006, to create a more inclusive leadership. The Prime Minister’s critics say his favoritism toward Iraq’s Shi’ite majority, long oppressed under Saddam Hussein, has given rise to the renewed insurgency by the Sunni militant group Islamic State of Iraq and Syria (ISIS).

Al-Sistani’s comments, delivered by a representative in the Shi’ite holy city of Karbala, all but blamed Maliki for the crisis that began last week when militants seized Iraq’s second largest city and much of the north, the Associated Press reports.

“It is necessary for the winning political blocs to start a dialogue that yields an effective government that enjoys broad national support, avoids past mistakes and opens new horizons toward a better future for all Iraq,” said the Grand Ayatollah, who is deeply revered in Iraq. His call to arms last week prompted thousands to volunteer to fight ISIS, a group that split off from al-Qaeda, AP reports.

Al-Maliki’s bloc won parliamentary elections on April 30. The new parliament is supposed to meet by June 30 to pick a new speaker and president; they in turn would ask the leader of the largest bloc to form a new government. But it’s unclear if al-Maliki will be willing to step aside.

On Thursday, Obama said he would deploy up to 300 Green Berets to advise and train Iraqi troops, but he said “only leaders that can govern with an inclusive agenda are going to be able to truly bring the Iraqi people together.”

Iraqi officials have called for U.S. airstrikes against the militants, but Obama has so far declined. 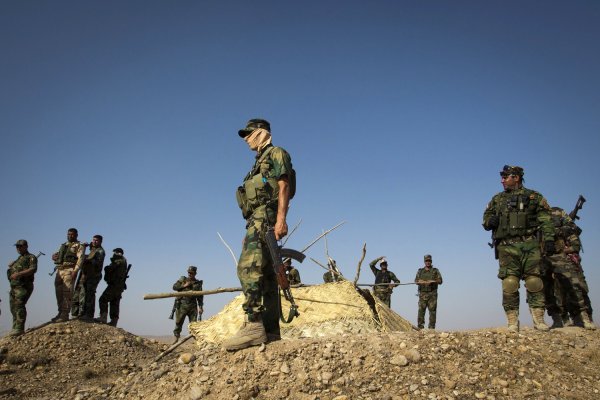 Kurdish Fighters Mull Whether to Defend Iraq
Next Up: Editor's Pick