Jenny McCarthy Doubles Down on Deadly

Jenny McCarthy is apparently determined to be present at the birth of every possible bad idea. Let’s pretend–pretend—for a moment that there was anything at all to the dangerous junk McCarthy has been peddling in falsely linking vaccines to autism and a host of other ills. Presumably her goal would be to protect children, to keep them safe and well.

And so what does McCarthy now propose to do with that generation of kids whose welfare she’s ensured? Why, hand them over to the tobacco companies, of course.

In a jaw-dropping bit of make-a-bad-thing-worse reputation management, McCarthy appeared in a cringe-inducing commercial for blu eCigs—which has since been pulled from the company’s website—peddling the increasingly popular product. Shot in what is meant to be a club, McCarthy appears in a skimpy dress with a silent piece of beef-cake by her side, going on about the virtues of e-cigs, including the fact that “I can whip out my blu without scaring that special someone away—know what I’m sayin’?”

But here’s the thing McCarthy isn’t sayin’: e-cigs are way, way too young a product for anyone to be able to say with certainty how safe or how dangerous they are. They may well be a gateway out of smoking for some people, a healthier alternative to traditional cigarettes. But they may certainly be a gateway in too—particularly for kids.

A study of electronic cigarette advertising from June through November of 2013 by the American Legacy Foundation found that Lorillard Tobacco Company’s blu brand spent more on marketing than “all other brands combined,” and that blu’s advertising was the most commonly viewed by teenagers, “with 73% of 12- to 17-year-olds exposed to blu’s print and TV ads.”

Worse, as my colleague Eliza Gray reported, advertising for e-cigs jumped 256% from 2011 to 2013, and more than 1.78 million middle school kids have tried them. No surprise since “last year 14 million kids saw ads for electronic cigarettes on TV [and] 9.5 million saw them in print.” And with e-cig brands sold in sweet tooth flavors like cherry and vanilla, it’s hard to pretend they’re not being marketed directly to consumers with immature palates—otherwise known as, you know, children.

At this week’s hearing before the Senate Commerce, Science and Transportation Committee, e-cig makers got blowtorched by lawmakers who had already been through the lies and obfuscations from tobacco executives denying their deadly products were addictive, and are now hearing the same dissembling from the new generation of nicotine peddlers. Sen. Jay Rockefeller (D-W. Va.) was the most blistering, saying, “I’m ashamed of you. I don’t know how you go to sleep at night.”

It’s impossible to say how they do, but Jenny McCarthy, if her own words are an indicator, sleeps like a baby. “Now that I’ve switched to blu I feel better about myself,” she said. As the legendary U.S. Army counsel Joseph Welch might have put it, at long last, Jenny, have you left no sense of decency? 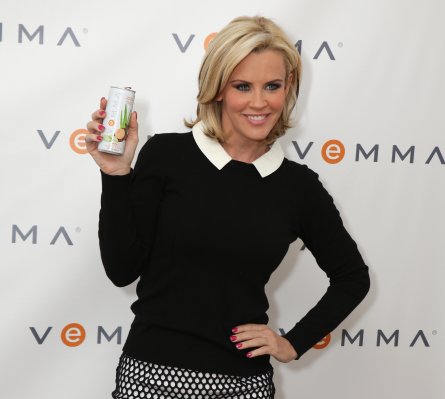 That Moment When You Must Have a Word With Jenny McCarthy
Next Up: Editor's Pick