Pretty much everyone is familiar with Joe Pesci, either from his role in popular Christmas-themed children’s film Home Alone or his role in Martin Scorsese’s Oscar-winning gangster classic Goodfellas. He largely retired from acting in 1999, but starting today, you can see him on the big screen in Clint Eastwood’s Jersey Boys. Just one hitch: you’ll be seeing an actor (Joseph Russo) playing the character “Joe Pesci” rather than the actor Joe Pesci playing a character in the film.

Jersey Boys the film is based on Jersey Boys the play, which tells the story of Frankie Valli and The Four Seasons from the group’s inception all the way through to (spoiler alert) the group’s reunion at the 1990 Rock and Roll Hall of Fame induction ceremony. Turns out, Joe Pesci actually played a not-inconsequential role in the formation of the popular doo-wop band. Growing up near Newark, N.J., young Pesci was friendly with Tommy Devito and the rest of the band and, according to the canon that the film presents, Pesci connected DeVito (the band’s behind-the-scenes leader at the time) with “Short-Shorts” writer Bob Gaudio, who would later write nearly all of the Four Seasons’ most popular songs. Now, according to the movie, DeVito works for Pesci. Yeah, that Joe Pesci. Small world, right?

The connection doesn’t end there, though. Later, Pesci—the actor, not the Jersey Boys character, who was a real person but not played by Joe Pesci because real-life Pesci was already in his 60s by the time Jersey Boys the play arrived on Broadway in 2005—starred in Scorsese’s Goodfellas. His name in the film? Tommy DeVito. And in case that weren’t enough of an in-joke, at one point during Goodfellas, Karen (Lorraine Bracco) confronts Henry (Ray Liotta), and says to him, “”Who the hell do you think you are, Frankie Valli or some kinda big shot?” Valli, in addition to being the lead singer in the Four Seasons, also allegedly had ties to the Italian mob (as did DeVito), so there’s more than enough self-referentiality going on here.

Anyhow, here’s the point: without Joe Pesci, we likely wouldn’t have The Four Seasons, Jersey Boys (the play or the film), Goodfellas or My Cousin Vinny. There are likely plenty more links to be made, but probably best to stop here before the universe collapses on itself. 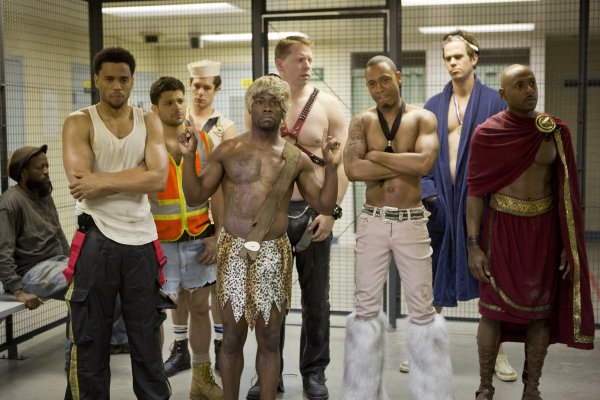 Think Like a Man Too Has Very Little to Do With Thinking Like a Man
Next Up: Editor's Pick