Jabar Yawar runs his pointer along a map of Iraq, indicating the territory now controlled by the militant group Islamic State of Iraq and Syria (ISIS).

“We are sharing a thousand-kilometer border with the terrorists,” said Yawar, General Secretary of the Ministry of Peshmerga, the Kurdish armed forces alarmed by the ISIS gains. “Right now the Peshmerga just want to defend and strengthen this line and stop the terrorists from entering Kurdistan.”

As ISIS militants advanced, Iraqi soldiers abandoned their posts, and the Peshmerga quickly moved in, filling the security vacuum and laying easy claim to contested lands. So far ISIS has made no threats on the Kurdish territory, but it’s not clear if that’s a recognition of the Kurdish claim, or an unwillingness to open new front in their offensive, particularly against the capable Peshmerga fighters. The Peshmerga battled Baghdad and Ankara for national recognition and territory for decades. Many in the West recognize the Peshmerga from images of their female recruits with military fatigues, long braids and Kalashnikovs training in the mountainous region between Iraq and Turkey.

Years of combat against large, if not well-trained armies, and ingrained nationalism fueled by decades of oppression, left the Kurds with a strong fighting force.

“There is great national soul inside our fighters,” Yawar said, adding that retired soldiers have been asking to reenlist to fight against ISIS.

Today, there are many young recruits lingering outside Yawar’s office at the Peshmerga ministry building. Most have never seen combat, as the Kurdish fighters haven’t been in a proper war since they fought the Iraqi army more than a decade ago.

Still the 200,000-strong force might be the best chance to fight ISIS, as the U.S.-built Iraqi army remains ineffective.

Even with internal political dissent, the Peshmerga are a source of national pride among the Kurdish population. In a shop in Erbil, a group of men watch their forces maneuver in the desert against ISIS on a Kurdish TV channel. The soldiers in camouflage fly their sun-crested Kurdish flag against a patriotic soundtrack.

“I’m Peshmerga,” said Wali Mustafa, smiling. Like many here, he fought with the Peshmerga when they were a less formal force. “The Iraqi government needs the Kurds now,” he said. “We don’t have to prove anything, but this is definitely an opportunity.”

But officials in the Kurdish administrative center of Erbil say they won’t be quick to join Prime Minister Nouri al-Maliki’s fight. Erbil warned Baghdad about the impending assault on Mosul and the northern province, according to sources in the Kurdish government, but there was no action from the capital. Once ISIS entered the city, there was a call from Baghdad requesting Peshmerga assistance, but at that point it was declined. So far, there has been no official request for Kurdish forces to cross their newly-held border.

“We are not a force that takes requests,” said Minister Falah Mustafa Bakir. He is the Head of the Department of Foreign Relations for the Kurdistan Regional Government (KRG)—essentially a complicated title for a man who heads-up foreign affairs for an entity which is not a formal state, but looks and acts like one. “How could al-Maliki ask for this when he has not respected the Peshmerga forces. … They were supposed to be paid, trained and equipped by the federal [Iraqi] government as part of the national defense system, but they have been ignored.”

For the last six months, Baghdad held the purse strings of the KRG, failing to transfer the 17 percent of the Iraqi budget Erbil is mandated under the constitution. Further, Baghdad objected to independent Kurdish oil sales.

“Before June 10 there was already an atmosphere of mistrust between Erbil and Baghdad,” said Hoshang Waziri, an Iraqi political analyst. “You can’t reduce it to one issue, but a big part was the Kurdish acting like there was no central Iraqi government, but still saying ‘give us our 17 percent’.”

Wazir said both sides have resorted to finger pointing in the current crisis, with the Kurds blaming Baghdad and Baghdad claiming the Kurds are using the instability to their advantage.

But Kurdish affection for Washington is strong—even on Kurdish military compounds, young fighters wear “US Army” shirts bought in a local market. Still, while the U.S. has been a longtime ally, Kurdish leadership has been burned before, supporting American objectives and getting little in return. In 2003, the Peshmerga fought alongside American forces, running Saddam Hussein’s army out of the north and taking important cities including their aspirational capital, Kirkuk. But the Kurds left Kirkuk shortly after, at the Americans’ request.

Bakir says he feels Washington sides with Baghdad over Erbil.

“We did everything to support the political process in Iraq that was initiated by the Americans, but unfortunately in return we were not rewarded,” Bakir said. 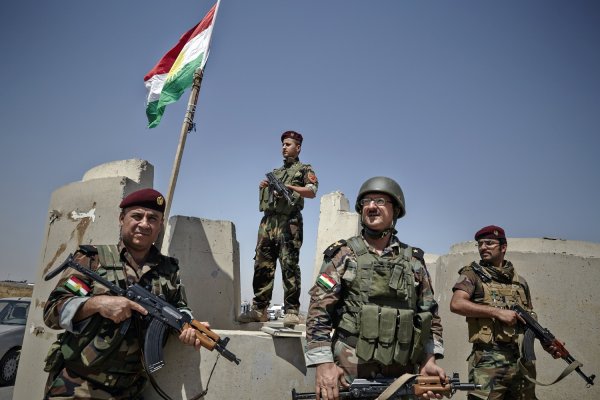