There's a Swastika Jersey on Display at the World Cup

A Germany 1934 FIFA Soccer World Cup team jersey, The nazi eagle and swastika clearly visible on the jersey's breast, is displayed among other national soccer team jerseys on a shopping mall in Salvador, Brazil, June 19, 2014.
Bernat Armangue—AP
By Aleksandra Gjorgievska

An ongoing exhibition of soccer jerseys dating back to the first World Cup features a Nazi-era shirt with a silver swastika attached to its front, the AP reports.

The exhibit, on display at a mall in Salvador, Brazil, includes over 100 shirts from various countries. As the first World Cup was held in 1930, the collection features a replica of a German 1934 shirt: a white jersey with the Nazi eagle and swastika logo sewn into its breast. A black Italian shirt from the time of Mussolini featuring the symbol of Italian fascism—a cylinder around an ax—is also on display.

After some visitors expressed concerns about the Hitler-era jersey, collection owner Duda Sampao emphasized to crowds at the mall that the shirt is of historical significance. Sampao told the AP that the exhibit has been supported by the local Brazilian World Cup organizing committee. The committee’s endorsement implies the support of FIFA, he noted. 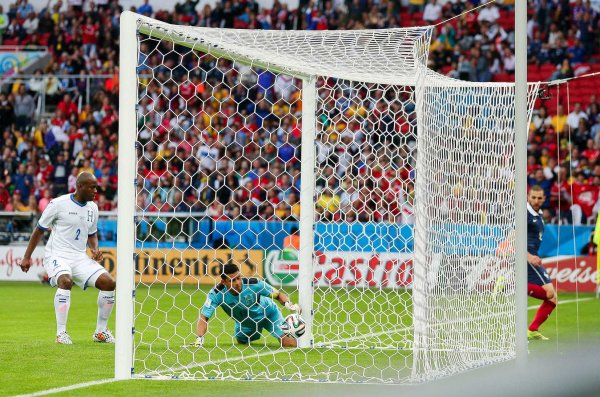 Does Technology Spoil the Beautiful Game or Ensure Justice?
Next Up: Editor's Pick