Malaysia, Thailand and Venezuela have not made a substantial effort in the fight against human trafficking over the past year, the U.S. State Department said in a report released Friday.

The State Department’s annual Trafficking in Persons report ranks countries in terms of the efforts to put a stop to the practice of forcing humans to labor against their will. Thailand, Malaysia, and Venezuela’s status was automatically downgraded this year because they have been on a State Department human trafficking watch list for over four years and have not improved.

Thailand is among the worst offenders, according to the State Department. Recent news reports have highlighted widespread trafficking in the Thai fishing sector, where tens of thousands of migrants have been forced to work on fishing boats often without contracts or stable wages. Many others have been pushed into Thailand’s illegal sex trade.

Ambassador Luis CdeBaca from the State Department’s Office to Monitor and Combat Trafficking in Persons said Thursday that although the U.S. government has worked well with members of the Thai government, overall there’s a general sense of complicity that his office can’t overlook.

“The widespread official complicity in human trafficking that continues to hinder their performance against sex trafficking and forced labor—the government as a whole did not demonstrate serious efforts to address that,” CdeBaca said on a conference call.

Though the Thai government reportedly paid a U.S. public relations firm $51,000 a month to help it boost its rating on the State Department report, the U.S. downgraded the country to the bottom tier, where it stands alongside 23 others including North Korea, Iran, Russia, China, Libya and Cuba. The 23 countries that were placed in the report’s lowest tier could face U.S. government sanctions on non-humanitarian, non-trade-related aid.

Issues similar to those identified in Thailand were also found in Venezuela and Malaysia, which also had their trafficking status downgraded by the State Department. According to the report, the Venezuelan government didn’t provide updated trafficking data, though its level of anti-trafficking enforcement efforts was about the same as in 2013. Meanwhile, the State Department found that Malaysia failed to adequately prosecute traffickers and protect victims.

Despite the downgrades of a handful of countries, several others, including Afghanistan, Chad and Honduras, saw their status boost as a result of a renewed focus on trafficking. The U.S., meanwhile, remains among the top-ranked nations in terms of combatting trafficking, despite the growing attention on the problem of trafficking in the country and the treatment of victims within the criminal justice system.

“While the U.S. goes overseas and judges other countries on their commitment to trafficking, we also have to be critical and take an honest look at the conditions and the commitment of our government here at home,” Melysa Sperber, Director of the Alliance to End Slavery and Trafficking, told TIME. 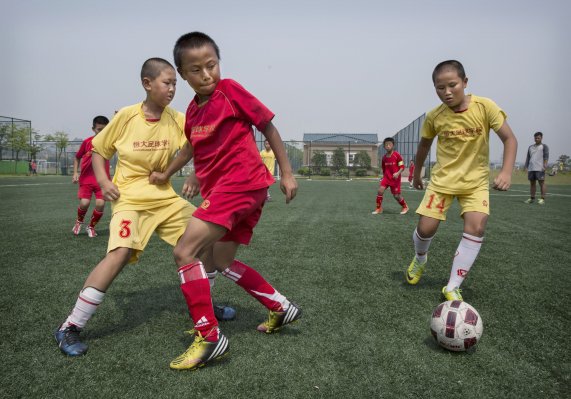 Welcome to China's Evergrande, the World's Biggest Soccer Academy
Next Up: Editor's Pick