Rick Perry Getting Ready for a 2016 Presidential Campaign

Two-and-a-half years after his first campaign for the White House flopped, Texas Governor Rick Perry sounds ready for another run at the presidency. “I’m glad I ran in 2012, as frustrating, as painful and as humbling as that experience was,” Perry told a group of national reporters at a Thursday lunch hosted by the Christian Science Monitor.

“Preparation is the single most important lesson that I learned out of that process,” he said. “Over the last 18 months, I’ve focused on being substantially better prepared. Please don’t take that as an indication that I’ve made a decision that I’m going to run or not—but if I do make that decision, I will be prepared.”

As his third term in the statehouse winds to a close, the swaggering Republican has refreshed his message, retooled his workout routine and retrained his sights toward the national stage. Perry is crisscrossing the country these days, dropping in on ice cream shops in Iowa, hot-dog fundraisers in South Carolina and donor confabs in California.

The overriding message? Perry is a national player, and he is not going to disappear when he steps down from his last term as governor. When he barreled into the race in the summer of 2011, Perry was touted as a major player in a moribund primary field. Handsome and folksy, with conservative credentials, a deep donor network and a record of poaching jobs from other states, Perry immediately vaulted to the top of pundits’ pecking order.

But the reality didn’t match the hype. Perry never connected with GOP voters. He ran a slipshod operation marred by unforced errors, including an indelible mental blank at a nationally televised debate. If he runs again, Perry would be betting that voters’ willingness to grant second chances will outweigh a sour first impression.

“I’m a competitor,” he told reporters Thursday. “I’m not going to ride off into the sunset.”

He has learned from the mishaps of the last campaign. Perry’s new message mixes conservative tribalism, such as skepticism toward climate change and a dose of Obama bashing, with a record of economic achievement designed to appeal to a national audience. Texas, he likes to say, has created 37% of the new private-sector private sector jobs in the U.S. over the past few years.

He has also changed his tune on immigration, a controversial issue that helped sink his last bid for the presidency. Audiences fixated on “oops,” but Perry’s advocacy of in-state tuition for the children of illegal immigrants (and his claim that those opposing the measure lacked a heart) had already sent his poll numbers plummeting among the GOP’s activist base.

This time around, he is speaking the Tea Party’s language on immigration. He resists immigration reform until the federal government secures the border, slammed the Immigration and Naturalization Agency and has directed the Texas Department of Public Safety to execute a “surge operation” to shore up the state’s southern border.

As the libertarian wing of the party grows, Perry has embraced efforts to be “smarter” about crime, embracing decriminalization of marijuana in Texas and touting the state’s success in adopting drug and prostitution courts that give judges sentencing flexibility with non-violent first-time offenders.

Perry is still stronger before conservative groups than he is with a national audience. “It’s time for a little rebellion on the battlefield of ideas,” he declared in a rousing March speech that sent activists at the Conservative Political Action Conference to the feet. In other settings, he has a tendency to goof: such as when he likened homosexuality to alcoholism at a recent speech in San Francisco. “I stepped right in it,” he told reporters Thursday, suggesting that social issues were a distraction from his core message of economic growth.

If he runs again, Perry would recalibrate his strategy. His late entrance into the 2012 primary put him at a structural disadvantage, which was exacerbated by a slow recovery from back surgery. “I figured surely I can heal up in six weeks and go back in the game. Not necessarily the case,” Perry joked, alluding to the condition that sapped his strength. This time, he has ditched his running routine and his cowboy boots in an effort to prepare physically.

He is also taking steps to broaden his donor base. Americans for Economic Freedom, a 501(c)4 formed with $200,00 left over from the super PAC backing his first presidential bid, has allowed Perry to grow his influence outside Texas. An aide says the group, which does not report its finances, has the backing of a wide swath of the Republican donor class. It is bankrolling his trips to meet with donors and give speeches, as well as to run television ads designed to highlight the Lone Star State’s economic boom. And it is funding his visits to Democratic states to poach businesses with promises of lower taxes.

The group has also run web ads highlighting early-state governors’ commitment to those economic principles, including Iowa’s Terry Branstad and South Carolina’s Nikki Haley. “This is his core message,” said a Perry strategist who declined to be named discussing future plans.

“The governor has been very clear that he’s keeping the options open,” the strategist continued. “The main focus is the 2014 election. If we do a good job there, it’s going to be easier in 2016.”

“We both have some tread left on our tires,” Perry’s wife, Anita, told attendees at the Texas Republican Convention. Her husband’s speech there this month had all the markings of an announcement speech. “This America we love faces some hard decisions. And it requires better leaders,” Perry said. “Let’s get to work.” 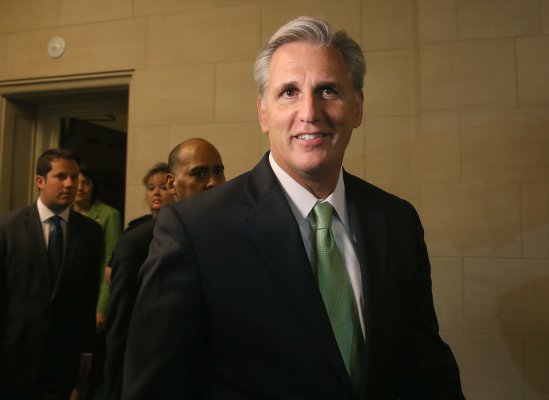