President Barack Obama announced Thursday that he’s prepared to deploy up to 300 special forces to Iraq, as militants who have plunged the country into chaos consolidate their gains.

Speaking to reporters from the White House Briefing Room, Obama said the Green Berets would be focused on training Iraqi troops to fight back against the Islamic State of Iraq and Greater Syria (ISIS), the Sunni, al-Qaeda inspired extremist group that has captured several cities and has its sights set on Baghdad. He emphasized that the U.S. was not returning to a fight it waged for eight years before a 2011 withdrawal, but was focused on training and helping foster a diplomatic solution to the current crisis.

“American forces will not be returning to combat in Iraq,” Obama said. “But we will help Iraqis as they take the fight to terrorists who threaten the Iraqi people, the region and American interests as well.”

Obama said that if conditions warrant, “we will be prepared to take targeted and precise military action,” noting that he has already ordered the pre-positioning of U.S. assets in the region and “significantly increased” intelligence, surveillance and reconnaissance presence. A senior Administration official did not rule out air strikes against ISIS militants in Syria, where they are engaged in a long-running civil war against the regime of Bashar Assad. “We don’t restrict potential U.S. action to a specific geographic space,” the official said.

Focusing on the need for political reconciliation between Sunnis and Prime Minister Nouri al-Maliki’s Shi‘ite government, Obama said he would dispatch Secretary of State John Kerry to the region this weekend. But he left the onus on Iraqis to come together, declining to say whether al-Maliki should remain as the head of government but saying American help may flow more smoothly once Iraq forms a new government following April’s parliamentary election. “It’s not the place for the United States to choose Iraq’s leaders,” Obama said.

“American combat troops are not going to be fighting in Iraq again,” he added. “We do not have the ability to simply solve this problem by sending in tens of thousands of troops.”

Obama’s comments came after a long meeting with his national security team in the Situation Room. Many congressional Republicans have urged him to do more to stem the violence in Iraq, and Iraqi leaders themselves have asked for U.S. air strikes. Despite the options he put on the table Thursday, Obama did his best to keep the focus on Iraqi leaders.

“Above all, Iraqi leaders must rise above their differences and come together around a political plan for Iraq’s future,” he said. “Shia, Sunni, Kurds, all Iraqis must have confidence that they can advance their interests and aspirations through the political process rather than through violence.”

On a conference call with reporters following Obama’s remarks, a senior Administration official said both manned and unmanned flights are already providing “round-the-clock coverage over Iraq.” And even as Obama said he was mindful of avoiding “mission creep” in Iraq, one official said the military has “more than 30,000 troops at sea and shore, including fixed and rotary wing aircraft” in the region.

“We are not at the stage where we are prepared for air strikes, obviously, the President hasn’t asked us to do that,” the official added.

Obama had appeared to be weighing air strikes on Iraq since last week, but at first officials ruled out any ground presence in Iraq. “We’re not considering boots on ground,” a senior Administration official said Thursday.

On Sunday, Obama ordered 170 American troops into Iraq to bolster security at the American embassy in Baghdad, with another 100 ready to enter the country to secure airfields if needed.

House minority leader Nancy Pelosi expressed concern over the deployment of U.S. troops as trainers in Iraq, alluding to Vietnam, where a U.S. training commitment snowballed into an all-out war.

“I think that you have to be careful sending special forces because it’s a number that has a tendency to grow,” she said before Obama’s statement. “And so I’d like to see the context, purpose, timeline and all the rest for anything like that.”

Obama cautioned Iran, which has also deployed forces to Iraq in support of the Shi‘ite-led government, against further destabilizing the situation, saying it could “play a constructive role” if it encourages reconciliation between rival sects. “If Iran is coming in solely as an armed force on behalf of the Shia and it — if it is framed in that fashion, then that probably worsens the situation and the prospect for a government formation that would actually be constructive over the long term,” he said. 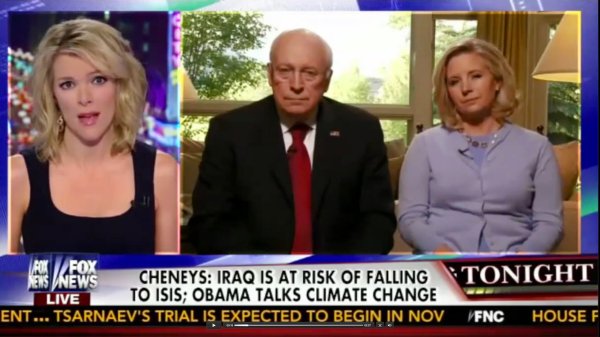 Megyn Kelly Tells Dick Cheney He Was Wrong About Iraq
Next Up: Editor's Pick