Up and down Frustrated by gridlock and a lack of comity in Congress, Manchin says he just “wants the place to work”
Thomas Prior for TIME
By Jon Meacham

Things are best, he figures, the farther away he can get. As the junior Senator from West Virginia, Democrat Joe Manchin III–charming, plainspoken, moderate–believes his most productive hours as a lawmaker are spent not on the Senate floor or in the cloakroom or committee rooms but on the waters of the Potomac River aboard his houseboat, which, in an act of parochial pride, he plans to christen Almost Heaven.

Anchored 8 miles south of the Capitol, the boat is Manchin’s home when he spends the night in Washington three nights or so a week during session. (“I wasn’t crazy on buying any real estate in Washington, not at all,” Manchin says.) The houseboat and its predecessor, the Black Tie, serve as a kind of floating incubator of that tenderest of Washington flowers in the first decades of the 21st century: bipartisanship. “Nobody knows anybody up here,” Manchin, 66, says of the Senate. “It’s amazing. There just aren’t enough real relationships.”

That’s where the boat comes in. With pizza and beer (and the occasional bottle of merlot, a shared favorite with Republican Saxby Chambliss of Georgia), Manchin routinely invites Senators from both parties out for evening cruises. “Like a Tom Harkin and a Ted Cruz–when would you ever get them together in a room, O.K.?” Manchin said to TIME. “And you’d be surprised how much people have in common.” Charles Schumer of New York is a particularly enthusiastic guest. “Schumer loves it so much, the whole ambience of it,” says Manchin. “Schumer thinks it’s his boat.”

And so Manchin is trying, but by his own account, the task of restoring some measure of comity to the halls of Washington is likely to take more merlot than his boat can safely carry. Moderates like Manchin are an endangered species on Capitol Hill. A conservative Democrat with a bias toward action rather than rhetoric, he represents an older style of politics, and the story of his frustrations with life in the Senate–a story he tells with characteristic candor–puts a face on the largely abstract national angst about Washington. Put another way, if Joe Manchin can’t make headway on the Hill, could anyone?

For now, the answer is probably no. The moment is hardly congenial for centrist dealmaking, which is the skill set that former governors like Manchin often bring to Washington. With the Tea Party defeat of House majority leader Eric Cantor and the troubled re-election bid of Mississippi Senator Thad Cochran, who also faces a challenger from the right, congressional politics is now more often about playing to the base than building alliances between parties. “I know dysfunctional families that function better than the Senate does,” says Manchin. “It’s just crazy.” Given that the dysfunction seems impervious to therapy, a Senator like Manchin has to make a decision: stay and fight, or go? And if he goes–in his case, most likely to return to West Virginia to seek to reclaim the governorship in 2016–then what’s left once the Almost Heaven has sailed away?

Manchin’s journey to the senate began in the small coal-mining town of Farmington, W.Va. He was raised in his grandfather’s grocery store, watching his grandmother take care of the needy in the neighborhood and absorbing the family’s homespun wisdom. “Son, if you can say no with a tear in your eye, you’ll be O.K.,” Manchin’s father, a former mayor of Farmington, would say, urging his son to empathy–or at least the appearance of it, which amounts to much the same thing in politics. It was a working-class world, but the Manchin family was important enough in the state that young Joe remembers Teddy Kennedy eating his grandmother’s spaghetti during the pivotal 1960 West Virginia presidential primary.

Manchin has always had a knack for knowing the right moves. Growing up in the 1950s, his older sister forced him to learn to dance so that she could practice with him–which meant that by the time Joe was old enough for the sock hops, he had something going for him that a lot of other guys didn’t: how to move around the floor. That was how he met and wooed his wife Gayle at a fraternity party at West Virginia University.

A childhood spent in his grandparents’ store tending to customers–listening to them, figuring out what they needed and how to get paid for it–prepared him for the folkways of state politics. After a career in the family businesses, Manchin served in both chambers of the West Virginia legislature, then became secretary of state before winning the governorship in 2004. In Charleston, he was a strong fiscal steward and was a predictably strong defender of the coal industry. In 2010, when he sought the Senate seat vacated by the death of Robert Byrd, he ran a campaign ad in which he took a rifle to a copy of cap-and-trade legislation–anathema to West Virginia’s coal producers.

Hardly subtle, but it was Manchin who, in the wake of the massacre of schoolchildren in Newtown, Conn., in late 2012, joined Pennsylvania Republican Pat Toomey to propose and push legislation to strengthen and expand background checks on gun sales in the U.S. (Pictures of the slain children now hang in the front hallway of Manchin’s D.C. office.) The bill failed, but the effort positioned Manchin as a man willing to take political risks back home for the greater good–and prompted the Washington Post to publish a front-page piece that described Manchin’s Potomac hospitality.

There have been some brighter moments. Last summer, after congressional leaders failed to pass a student-loan fix in part because it lacked the moderates’ support, Manchin and Angus King of Maine met and concocted a new proposal. Bringing along six influential, bipartisan members, Manchin and King beat the dispiriting odds and passed the new bill 81 to 18 in the Senate. It passed overwhelmingly in the House and became law. In the days after the bill’s passage, Manchin’s staff invited King’s staff to come to their office to celebrate and drink moonshine. The two staffs continue to exchange West Virginia pepperoni rolls and Sea Dog beers.

The problem has been that such hours of cooperation are few and far between. Manchin himself is willing to vote outside the party box: his record of voting with the Senate Democratic caucus, at 72.8%, is the lowest for any sitting Democrat. “I’m a West Virginia Democrat–I’m not a Washington Democrat,” Manchin says. “I’m fiscally responsible and socially compassionate.” In practice it’s turned out to be a lonely place on the spectrum.

Hence the frustration. “I think that when he went to Washington, he figured he was in the sweet spot as a dealmaker because he was one of the most conservative members of the Democratic caucus–probably one of the three most conservative members,” says Neil Berch, a professor at West Virginia University. “He figured, Well, I’m just about the median vote in the U.S. Senate; people are going to come to me and make deals.” The reality, Manchin discovered, was that few lawmakers are interested in deals. The culture now favors the sharpening, not the smoothing, of differences. “My worst day as governor,” he often says, “was better than my best day as a Senator.”

On a recent day on Capitol Hill, Manchin met with representatives of both the Chamber of Commerce and the AFL-CIO in his hideaway office near the Senate floor to discuss how to reauthorize the Export-Import Bank, which helps finance the purchase of U.S.-made goods overseas and is a target of conservatives in the House. Both business and labor are in agreement. (“And that doesn’t happen much,” Manchin says.) It was the sort of issue that drives Manchin slightly crazy. “Here is a clear-cut issue, and we’re having a fight about it,” he says. He shakes his head. “We don’t live in a perfect world, so how do you make it better? You make it better by getting the best deal you can to make some progress for right now, and then you keep working at it. You can never put your opponent in an impossible position, and that happens way too often up here.”

He has to fight for even small victories. Recently, the President nominated Sylvia Burwell, a West Virginia native, to be Secretary of Health and Human Services, the department that runs Obamacare. On the day of the voting, Manchin grabbed a couple of Republican colleagues on the floor. “She’s a good woman,” Manchin told the other Senators. “She’s not going to change your mind on the thing, but it’s there, and don’t you want somebody who knows the numbers to actually run it?” Some of the Senators he’d lobbied voted no, but Burwell was confirmed, 78-18. Manchin said that had all his colleagues acceded to his request, that vote would have been “my big win for the week. Isn’t that something? Isn’t that kind of sad? But that’s where we are–the bar for getting something done is pretty low. Too low.”

Manchin finds the listless will of Congress baffling. “Why wouldn’t you want to get something done?” Manchin asks. “That’s why I liked being governor–you were measured every day by what you’d done that day.” The premium was on action, and action required an open channel between the governor and the legislature. “I wore that governor’s mansion out,” says Manchin. “I went through more booze and food than you can imagine.” If he couldn’t find the state legislators he wanted to see, he’d send the state police out to find them. “You’ve got to work at this, you’ve got to talk to people, you’ve got to build some relationships, even if they’re not perfect,” says Manchin. “Bill Clinton was a master at this. And you know why? He was a former governor.” Manchin and Obama have little contact. The Senator says he usually sees the President once a year at a Democratic retreat for lawmakers, and there was a meeting on student-loan reform. “But he never calls me to come over and talk.”

Manchin gets asked a good bit about changing parties–Mitt Romney carried West Virginia by 27 points–but he waves off the possibility. “I just don’t see that,” he says. “I can’t see turning on a whole lifetime of beliefs.”

Changing jobs, though, is a different matter. The West Virginia governorship is open again in 2016: Will he pack up the boat and head home to reclaim his old post? “I’m going to wait until the 2014 election is over, and then I’m going to see what I should do,” says Manchin. He will be 67 this year, and he worries that “I’ve never been in a less productive time in my life than I am right now, in the United States Senate.”

In Charleston, Manchin got results, which was, in his view, the point of government. That is not, however, the point of Washington at the moment. All of which drives him out to his boat and may soon drive him back to that governor’s mansion in Charleston. The merlot there is less expensive and, if history is any guide, goes further.

–WITH REPORTING BY ALEX ROGERS/WASHINGTON 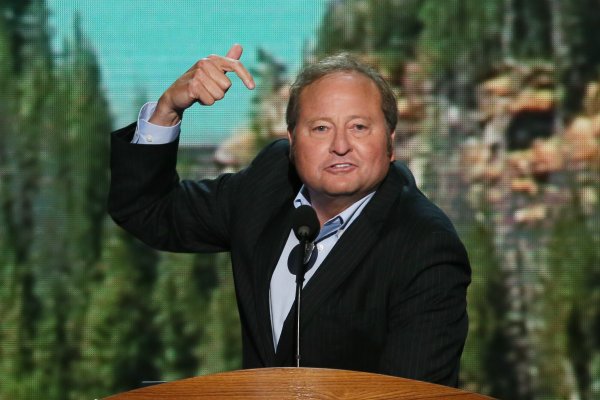 Brian Schweitzer Undercuts His 2016 Chances
Next Up: Editor's Pick