Moscow opened a new economic front in its showdown with Ukraine on June 16, when the Russian energy giant Gazprom cut off natural gas supplies to the country, saying the government in Kiev had failed to make payments for past deliveries. The move came days after Ukrainian President Petro Poroshenko alleged that Russia had sent tanks to separatists in eastern Ukraine.

The skirmishing threatens to intensify unrest in the region, where the U.N. says that more than 350 people, including 257 civilians, have been killed since the start of a pro-Russian uprising in April. On June 14, rebels shot down a military plane in the eastern Ukrainian city of Luhansk, killing 49 people.

The Ukrainian leader’s claims were backed by U.S. and British officials. Russia, however, insisted that it had not intervened in the fighting, strenuously denying that its tanks had crossed the border. It has criticized Ukrainian forces for cracking down on the pro-Russian rebels.

As the violence continues, Moscow’s decision to cut off gas supplies complicates the task for Poroshenko as he tries to contain the conflict in eastern Ukraine, negotiate with Russia and manage relations with his allies in the West. Ukraine’s Prime Minister, Arseniy Yatsenyuk, said Russia’s move was “not about gas” but “a general plan for the destruction of Ukraine.” Hours after halting deliveries to Ukraine, Gazprom said it also saw “not insignificant risks” to the gas it supplies to Europe via pipelines that run through the country.

In a bid to resolve the ongoing crisis, Poroshenko on June 18 proposed a unilateral cease-fire, saying he hoped it would pave the way for a broader peace plan. The proposal followed a phone conversation between Poroshenko and Russian President Vladimir Putin. But it was unclear if the cease-fire would be supported by the rebels inside Ukraine. Putin says he has no control over them, while some separatist leaders have cast doubt on Poroshenko’s motives, leaving the door open to yet more violence in the restive region.

‘Argentina has no reason to be submitted to this kind of extortion.’

CRISTINA FERNANDEZ DE KIRCHNER, President of Argentina, rejecting a U.S. court ruling directing her country to pay more than $1 billion to creditors in a long-running dispute over its sovereign debts

The Boston Consulting Group tallied the proportion of millionaire households in countries around the world. Here’s a sampling of the figures:

Colombia’s centrist President won a second term in office on June 15 after a victory over right-wing challenger Oscar Ivan Zuluaga. The election hinged on Santos’ support for peace talks with the Marxist rebel group FARC after half a century of civil war that has left more than 200,000 people dead.

Santos trailed Zuluaga in the first round of voting and scored only a slim victory in the final round, securing 51% of the vote. Four years after winning with 69% of the ballots, he will have to convince lawmakers and the rebels that he still has a mandate to strike a peace deal.

A year and a half after peace talks began, Santos still has to overcome key sticking points, like the logistics of disarming roughly 8,000 FARC fighters. He has also opened preliminary talks with ELN, the country’s second largest rebel group. It remains unclear if he can coax ELN into more formal negotiations.

Critics worry that even if Santos strikes peace deals, he won’t be able to stem a lucrative illegal drug trade controlled by the rebels. The U.S. has provided over $9 billion in mostly military aid to combat cocaine production in the country since 2000. Santos–who was visited by U.S. Vice President Joe Biden on June 18–will be under pressure to continue the crackdown while trying to get the rebels to put down their arms.

A Prayer for the Missing

Israeli women take part in a mass prayer at Jerusalem’s Western Wall, Judaism’s holiest site, for the return of three teenagers who were abducted on June 12 in the West Bank. Israel responded with a massive ground operation across the area, arresting more than 200 Palestinians as it searched for the missing boys. Israeli officials blamed the abductions on Hamas, the militant group that recently joined a Palestinian unity government.

The Enriched ‘Super Banana’ That Could Save Millions of Lives

Australian researchers are about to begin human trials of a genetically modified banana enriched with vitamin A. The new fruit could revolutionize child health in the developing world.

Vitamin A deficiency blinds some 300,000 children annually and is linked to the deaths of nearly 700,000 others. The problem is particularly acute in East Africa, where bananas are a staple but lack essential nutrients.

Researchers in Queensland, Australia, developed banana variants with up to five times more vitamin A than usual. They look like regular bananas on the outside–but feature orange flesh inside.

Critics of the project–which is backed by a donation of nearly $10 million from the Bill & Melinda Gates Foundation–warn that the long-term effects of genetically modified foods remain unknown.

The team behind the project hopes to complete human trials by the end of the year and receive approval to grow the bananas in Uganda by 2020. They say the technology could later be used for other crops around the world.

Former Formula One champion Michael Schumacher, who suffered a near fatal skiing accident in December, came out of a months-long coma

The Vatican canceled Pope Francis’ weekly public audiences for the month of July, prompting concerns about his health

Gunmen attacked a Kenyan coastal town, storming hotels, a bank and a police station in an assault that left at least 48 people dead 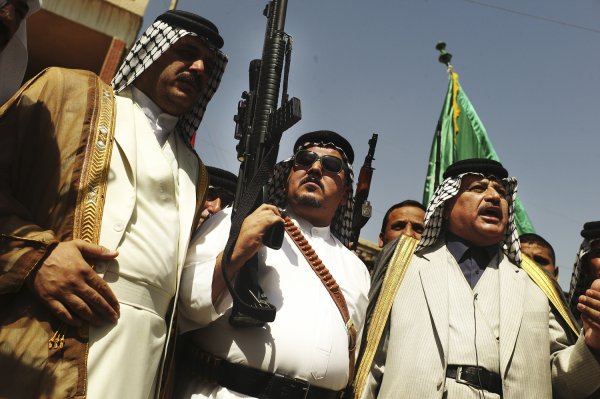 The Middle East's Unlikely Alliances
Next Up: Editor's Pick