The Hollywood Cinematographer Has a New Job Path: Video Games

Video game developer Ready at Dawn has been working on The Order 1886 since 2010, and it’s tentatively scheduled for a 2015 release. The Order drops players into an alternate Victorian-Era reality torn apart by a vicious war between mankind and a subset of humans: the “Half-breeds.” The game recasts the familiar humanity versus ‘other’ story with a steampunk twist, though what sets this game apart is the development team’s film-style ambitions.

“We wanted to show gamers what the next-generation of gaming would be like,” said Ru Weerasuriya, the CEO and Creative Director at Ready at Dawn. “So, for us, it not only meant cool gameplay, but it also meant that we needed to build a new experience. And what we’ve done with this game is what we coin as filmic … We’ve used [techniques] that are very movie-like … to build the game.”

Film has had over a century to develop as an art-form, while video games have had a mere four decades. Early filmmakers and film theorists experimented to understand the psychology of editing and the subconscious effects of cinematography. Take Lev Kuleshov’s famous experiments with the “cutaway,” for instance (as seen below). In the 1920s, Kuleshov alternated various shots of objects (a bowl of soup, a baby doll), and intercut them with the same shot of an emotionless actor’s face. Each time audiences believed that the actor’s emotional expression had changed, even though it hadn’t. Now, video game designers are looking to build off these pre-existing film techniques to slash the medium’s maturation time in half.

It’s no secret that video games have always aspired to be similar to film. We’ve seen games add complex narratives to gameplay mechanics, the addition of long and intricate GGI driven cutscenes, and the implementation of Hollywood motion capture to bring actors like Ellen Page and Kevin Spacey to life inside games. The Order, however, looks to experiment with an aspect of motion pictures that is much more subtle and impactful: Cinematography.

“We decided to replicate the attributes of physical lenses used in photography and cinematography in our game engine, such as a lens’ specific depth of field or focus,” Weerasuriya said. “This also meant that we had to recreate the “imperfections” found in physical lenses that we often take for granted. Lens curvature, chromatic aberration, vignette and lens dirt are just a few examples. In games, we often have the tendency to see everything through a perfect window, which is very much unlike what people have been accustomed to seeing in other visual media through the lens of a camera.”

If the final product is anything like the demonstrations shown by developer Ready at Dawn at E3, then this could be another pivotal step in the medium’s maturity. Many video games have been a sterile CGI representation of life, but by borrowing from the art of cinematography the medium can begin aspiring to be more.

Cinematography is all about the art of subconscious manipulation and subversion. By design, audiences are meant to be oblivious to the techniques that are manipulating them to feel sad, angry, or excited during a film. The audience may feel that the antagonist is powerful, without realizing that it is the camera’s upward angle, the telephoto lens implemented by the cinematographer, and the red splash of light on the character’s shoulders put there that made them feel as such. The Order 1886 is delving into this art of subconscious manipulation in hopes of providing a more realistic experience.

“The strange thing is that although many people might not be able to pinpoint the technicalities of everything they see through a regular lens, once we remove the attributes and imperfections that make a certain shot feel ‘real,’ they will automatically know that something is off with the shot,” Weerasuriya said. “Replicating the correct glass and the imperfections that come with it, as well as the lighting and other film techniques we use, are what make our visuals feel familiar and grounded in reality.​”

Realism is not the intent of all video games, of course. Gamers and critics alike have expressed worries that bringing Hollywood aesthetics to games can be confining, criticizing the use of passive cinematic cutscenes in an interactive medium. The development team claims this isn’t The Order’s filmic ambitions, however. Cutscenes actually flow smoothly between exposition and gameplay without jarring shifts from one graphically polished reality, to another that looks visually mismatched. With any luck, The Order’s cinematic roots will make for a more consistent experience — one that doesn’t periodically jolt you out of the game world.

For more of the inside scoop with Ready at Dawn’s CEO and Creative Director Ru Weerasuriya, check out the video above. 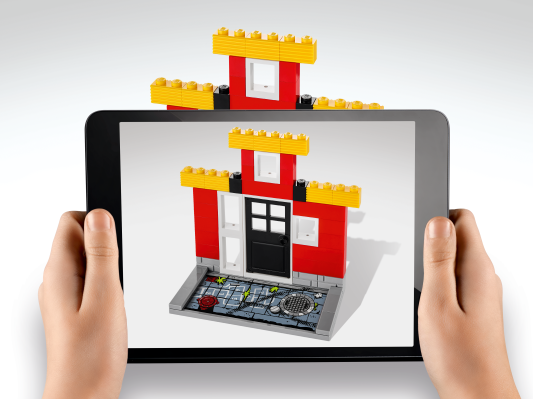 LEGO's Newest Games Will Absolutely Blow Your Mind
Next Up: Editor's Pick