In another victory for those who say the team’s name is offensive and should be changed, a U.S. Patent and Trademark Office appeals board on Wednesday canceled the trademark registration for the National Football League’s Washington Redskins.

The USPTO’s decision was the result of a case brought in 2006 by law firm Drinker Biddle & Reath on behalf of a group of Native Americans who argued the “Redskins” name was offensive. Federal law bans trademarks that “may disparage” individuals or groups “or bring them into contempt or disrepute.”

This litigation has been hard-fought,” the lawyer litigating the case, Jesse Witten told TIME. “The term ‘redskin’ is an ethnic slur… Many people who are Native Americans and not Native Americans have objected to this team name for a very long time.”

The U.S. denied the Redskins their trademark once before in 1999, but the decision was later overruled after the team appealed. The team is likely to respond to Wednesday’s decision with yet another appeal.

Senator Harry Reid, Democrat of Nevada applauded the USPTO’s decision, calling the Redskins’ team name racist. “Every time [Native Americans] hear that name, it’s a reminder of a history of racism and bigotry,” Reid said. “This is extremely important to Native Americans all over the country. It’s racist.”

The USPTO’s decision does not mean the Redskins can no longer use their name, but it does call into question the economic future of Redskins merchandise and other related revenue streams.

Pressure has long been mounting on the Redskins to change their name, which many Native Americans, football fans and others find disrespectful. A group of 50 U.S. Senators signed an open letter to NFL commissioner Roger Goodell last month calling on the NFL to change the team’s name, something team owner Daniel Snyder has refused to do.

“Daniel Snyder may be the last to see this, but it’s just a matter of time before he’s forced to change the name,” Reid said Wednesday. “The writing is on the wall.”

Wednesday’s decision makes it more difficult for the Redskins to bring successful lawsuits against competing merchants who use the team’s name, trademark lawyer for Kenyon & Kenyon LLP Jim Rosini told TIME, and the Redskins will have to rely on state trademark and unfair competition laws rather than federal courts to stop infringements.

In response to the mounting criticism, Snyder in March announced the creation of the “Washington Redskins Original Americans Foundation,” a group meant to help struggling Native Americans across the United States. 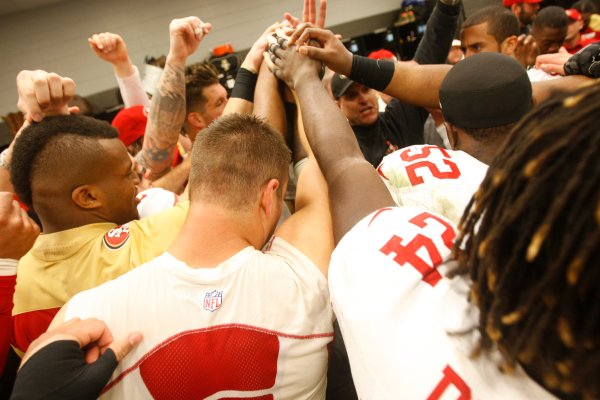