A City Is in Limbo as Iraq Spirals Out of Control

Personnel from the Kurdish security forces detain a man suspected of being a militant belonging to the al Qaeda-linked Islamic State in Iraq and Syria (ISIS) in the outskirts of Kirkuk June 16.
Ako Rasheed—Reuters
By Rebecca Collard / Kirkuk

In a large ornate room here last week, 20 generals were meeting to decide what would come next for their Kurdish fighters. After Iraqi soldiers deserted their posts last week in fear of approaching fighters from the militants group Islamic State of Iraq and Syria (ISIS), the Kurdish forces had waltzed into the city unopposed. Kirkuk is one of the country’s most contested cities, claimed by Arabs, Turkmen and Kurds. But in matter of hours, the Kurds had taken militarily what they failed to secure politically for decades—picking up millions of dollars worth of weapons left by fleeing Iraqi troops in the process.

“I don’t know why they left. There wasn’t even any fighting. They didn’t fire a shot at the terrorists,” said General Sharko Fateh, first brigade commander for the Kurdish fighters in Kirkuk. “A brigade of 17,000 soldiers just deserted.”

The fate of this contested oil-rich city should have been determined by a referendum years ago—with residents deciding if the region would stay in Iraq or join the Kurdish semi-autonomous territory. That proposed referendum was never held. Today it’s being debated against the backdrop of exploding violence in the country, as Sunni militants capture towns with an eye on Baghdad and Prime Minister Nouri al-Maliki’s Shi-ite government struggling to regain control. The militants pressed on with an assault on an oil refinery that started Tuesday and continued Wednesday.

“Now the Kurds hold the territory [in Kirkuk] and don’t need anyone’s permission to stay there,” said Gareth Stansfield, a professor of Middle East Politics at the University of Exeter. “If Iraq stays together, there are clearly questions about the ability of Baghdad as a central point to enforces its power over any part Iraq, whether it’s over the Kurds or Mosul or Basra or anywhere.”

In the meeting room in Kirkuk on Saturday, General Fateh said he didn’t know if the Kurdish fighters would stay in the city—or give back the weapons they found. While many here were pleased to see them on guard in Kirkuk, some worried the city will simply be claimed by Kurdish fighters—rather than the fate of the region being settled democratically.

“Now the Peshmerga are protecting the city,” Mohammed Ali, 54, an Arab shopkeeper in Kirkuk, said in using a term for Kurdish fighters. He said his family has been here for centuries. “But Kirkuk belongs to Baghdad,” he said. “Iraq is one country.”

That sentiment will be increasingly tested over the coming days and weeks, not only here in contested Kirkuk, but across Iraq, where calls to arms have an increasingly sectarian pitch.

The political alliance of Kirkuk’s Turkmen community is split. Some want Turkmen autonomy in Kirkuk, others are happy to look toward Baghdad or Kurdish Erbil, but there are fears of Kurdish dominance.

“The Kurds want to make Turkmen people afraid,” said Ali Mahdi, a council member of the Iraqi Turkmen Front. “To make them go from Kirkuk. They want to control all the government offices. And then after one year or two years they’ll say Kirkuk belongs to Kurdistan. We will not allow Kirkuk to belong to Kurdistan.”

But it’s seems unlikely now the Kurdish forces will retreat even if Iraqi brigades wish to return.

“They are convinced that they made that mistake and they should have stayed in 2003,” Stansfield said. The Kurds took Kirkuk in 2003, when U.S. forces entered Iraq, but left quickly under pressure from their American allies.

“One day after the liberation of Baghdad. We liberated Kirkuk with our Peshmerga forces,” said Ahmed Askari, a member of the Kirkuk Provincial Council. Askari himself returned with his family to Kirkuk that year. They were among thousands of Kurds pushed from Kirkuk under Saddam Hussein’s policy of Arabization the early 1980s, effectively resettling Arabs from the south of Iraq to Kirkuk to change demographics. “[Hussein’s] Bath security forces came to my house, put my family on a truck and sent them out,” Askari said. For decades they lived in Sulaymaniyah, in the eastern part of Iraqi Kurdistan.

As thousands of Kurds returned with their children, other groups in Kirkuk cried foul, saying it was now the Kurds trying to alter the demographics, bringing in people who were not born in the area.

“When the terror groups attacked this area, the Kurdish people defended themselves,” said Askari of the ISIS militants’ arrival last week. “Maybe now some people say we have liberated Kirkuk [again]. Some will say it’s our chance to take our rights to it.”

It’s not just historic ties to a homeland that makes this province so disputed, but the lucrative oil that sits under the surface. Kirkuk is just part of the Kurdish national project and the potential oil profits could be used to push the agenda forward. Since the fall of Hussein, the Kurdistan Regional Government has gained increasing autonomy and control of resources, and under the current President Masoud Barzani the area has found relative prosperity and security.

Even before this week’s events, Barzani was already upping the rhetoric of the autonomy for the Kurds. And as much of Iraq splitters along these sectarian divides, here in the Kurdish north, generals are thinking strategically and political forces are gaining territory and asserting autonomy.

“This is their moment to re-write the map of the Middle East and review the situation they’ve been in for the last 200 years. … Now the Kurds have their 50-year oil and gas treaty with Turkey in place, they have control of Kirkuk,” Stansfield said. “It’s still going to be difficult to move toward full independence, but these pieces are quickly falling in to place, and ISIS has actually brought this.” 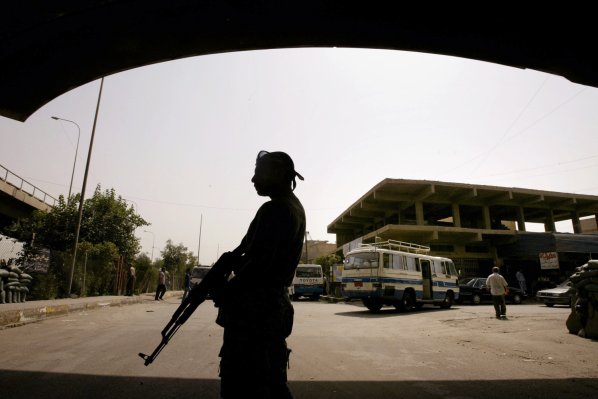 No 'Awakening' in Iraq This Time
Next Up: Editor's Pick