Hate sitting around a conference table for yet another meeting? Well, one group of scientists has a novel suggestion: They think you should be standing.

That’s right, the stand-up meeting. Thanks to wearable sensors (devices similar to the Fitbit or Nike+ FuelBand), researchers from Washington University found that taking the chairs out of the room had positive effects on workplace productivity.

“Our study shows that even a small tweak to a physical space can alter how people work with one another,” says lead author Andrew Knight, an assistant professor at Washington’s Olin Business School. “We wondered how this type of arrangement would play out for people working together in a group to achieve a collective goal,” he says.

Knight found that when standing, meeting participants were more excited and receptive to collaboration.

This work builds on earlier theories that suggest people do better work when they’re not sitting still. A lot of people use metaphors like rat race, hamster wheel and so on to describe corporate life, but some experts claim using actual treadmills delivers benefits.

Devotees say moving while working taps creativity. There are treadmill-desk combos like the Steelcase Walkstation and the TreadDesk, made by an Indianapolis company. Last year, the AP reported that TreadDesk expected to see a 25% increase in sales, thanks to purchases by big companies ranging from Microsoft to Coca Cola to Procter & Gamble.

Knight finds that the idea that not sitting down can bolster the flow of ideas holds true in a group setting, as well. Subjects in a series of experiments who were told to work together in a room where the chairs had been taken out reported that their fellow collaborators were less territorial about their ideas and more willing to share information than a control group that collaborated while seated around a table. Members of the research team also rated how well the groups did on their actual tasks (developing a university recruitment video) and found that the standers turned in a better performance than the sitters.

It might sound strange, but there’s an extensive body of scientific research showing that a person’s posture has strong influence on how — and how well — they work.

“Your posture influences psychology, and that influences behavior,” says Andy Yap, a post doctoral associate and lecturer at the Massachusetts Institute of Technology.

Yap conducted experiments and found that when we sit in tight, contracted positions — like squeezed into a too-small seat or hunched over our phone — we feel stressed and powerful, but standing in an “expansive pose,” with legs apart and hands on a table or on the hips, can make people feel more powerful. “Even though you don’t have to stand like Superman, having an expansive workspace would actually cause you to feel powerful,” he says.

“I think the implications are really important,” Yap says of the standing-meeting research. He adds that people being territorial about their ideas is a common problem that can derail good group collaboration, which makes the findings about standing relevant for anyone who has to work on team projects. “It might be cool to see if sitting in movable chairs could reap the same benefits,” he suggests.

Yap does offer one caveat to the standing-meeting concept. “One drawback about standing is that one’s physique become more obvious to the people in the group meeting,” he points out. Taller, bigger people are often unconsciously perceived to have more power, which could mean a shorter team member might not participate as much. “These physical attributes oftentimes affect interpersonal dynamics,” Yap says. 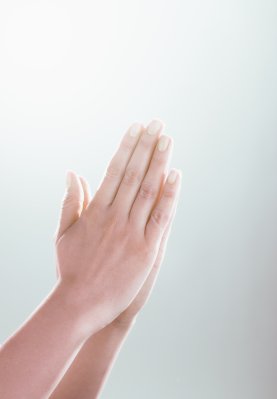 Job Hunting? Keep the Big Guy Upstairs Out of It
Next Up: Editor's Pick