Big Freedia knows a thing or two about twerking — last fall she helped set the Guinness World Record for the most people twerking simultaneously. This month, she has even more reasons to get on the dancefloor and celebrate: Her new album, Just Be Free, comes out today, and the second season of her Fuse TV reality show, Big Freedia: Queen of Bounce, kicked off last week.

As an ambassador for New Orleans bounce music, Big Freedia hasn’t been thrilled with how the recent attention surrounding twerking watered down and misrepresented a dance tradition with decades of history. So TIME asked Big Freedia (who is a man but uses female pronouns when talking about her work as a performer) for an introduction to bounce vocab. The questions of when and if it’s okay to borrow from cultures that aren’t your own have been a hot topic in pop music for the past year, but Freedia says she’s happy to share as long as you get it right. “I definitely want it to spread and make everyone aware of it,” Freedia says. “If you’re interested, definitely dig in.”

bounce: The kind of music Big Freedia makes. “Bounce music is uptempo, heavy bass, call and response,” she says. “It definitely has a lot to do with the ass-shaking. It’s New Orleans bass music.”

sissy bounce: File this one under terms not to use. “There’s no such thing as ‘sissy bounce,’” Freedia says of the term, which was created by a music writer, not New Orleans artists themselves. “We don’t separate it here in New Orleans at all. It’s just bounce music. Just because I’m a gay artist, they don’t have to put it in a category or label it. We have a lot of straight artists here, and they are offended by the term sissy bounce. We never did separate it here at home, and we don’t plan on it.”

twerking: “Twerking is definitely from New Orleans,” Freedia says. “We’ve been twerking for a long time and shaking our asses, but it’s a universal thing. There have been different people twerking all around the world. But New Orleans has definitely been in the lead for twerking or, as we call it here, p—y-popping. But we’ve definitely been doing it for the last 20 or 30 years.” The up-and-down butt-shaking move can be done in a number of ways — while squatting, while bent over, while against a wall. “It’s one dance move, but everyone has their own twist on it. Everyone has a different feeling of how they twerk.”

release your wiggle: Something Big Freedia asks everyone to do on “Explode,” the lead single from Just Be Free. “It’s a move that everybody gets into,” Freedia explains. “We’re shaking, and we snap our fingers together. We use both hands to snap our fingers at the same time and kind of throw out our head, so it’s giving us this power to release our wiggle.” See the move in action in the song’s music video.

yaka/glocka: One of Big Freedia’s most recognizable calls to the dancefloor is yakayakayaka, which gets repeated often on a number of songs, including “Na Who Mad” and “Explode.” “Yaka is basically like glocka — when we’re shaking, we’re like, ‘Ooh, she’s glocka, she’s going hard,’” Freedia says. “Yaka is kind of the same. We use it for glocka. It’s a feeling of, ‘She’s getting some, she’s going hard, she’s going in.’ I usually come up with my own words to relate to some of the words we already use, but to change the concept of it. Yaka and glocka are kind of the same thing.”

duffy: Another one of Freedia’s creations. “Duffy is go hard or go home,” Freedia says. “It’s just a concept that I wanted to have when we’re doing different things. When me and my dancers go in, we usually go hard or we go home. We’re not here to play. We go duffy.”

ol’ lady: “It means that I’m his girlfriend, I’m his lady, I’m the First Lady,” Freedia says of the phrase, which she calls herself repeatedly in a Just Be Free song of the same name. “That’s the concept, me and my boyfriend. It’s who’s number one, no matter who comes after. Anybody can be the ol’ lady no matter what. They don’t have to actually be an ol’ lady. If they’re the person who that person go with, they are the ol’ lady.”

buku: A variation on the French word beaucoup, buku simply means “a lot.” “‘Oh, man they had buku food over there.’ ‘They had buku groceries.’ ‘They had buku people there,’” Freedia says. “It’s a word of New Orleans. People use it very often.”

diva-ish: Often pronounced dee-ver-ish and also associated with fellow bounce artist Katey Red. “This is one of our newest ones,” Big Freedia says. “We put a little ish on the diva, and it definitely still means diva, but it’s our own style of words to put a little twist on it. We’ll switch any word, flip it and make it our own. ‘Child, that was diva-ish.’ ‘Ooh, she was just diva-ish, girl, she just gave me life.’ We mix it up in so many ways.” 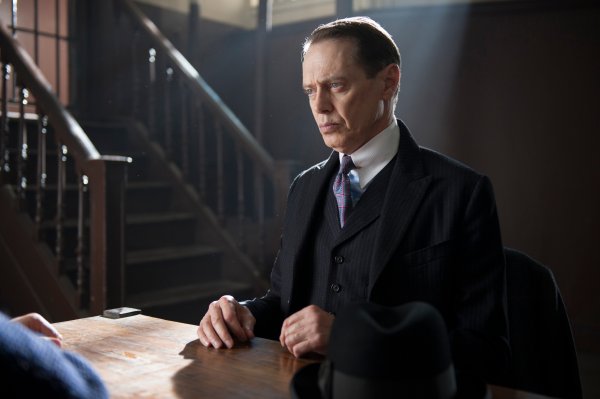 Boardwalk Empire Will Jump Forward 7 Years for Its Final Season
Next Up: Editor's Pick