Chad Devereaux examines bricks that fell from three sides of his in-laws' home in Sparks, Okla., on Nov. 6, 2011, following two earthquakes that hit the area.
Sue Ogrocki—AP
By Denver Nicks

Just a few years ago, earthquake insurance wasn’t something many thought much about in Oklahoma. That’s changed with the outbreak of tremors that has rattled the state in recent years, which many blame on increased oil- and gas-drilling activity.

“Every time there’s a decent-size earthquake, there’s a spike in interest,” says Matthew Ramirez, an agent for Farmer’s Insurance in Edmond, which has been affected by many of the recent quakes. So far in 2014, Oklahoma has seen 200 earthquakes of magnitude 3.0 or stronger.

Standard homeowner policies generally don’t cover damage caused directly by earthquakes (to a building’s foundation, for instance), though they usually do cover the damage that earthquakes can cause, such as burst pipes or fire. Before November 2011, Ramirez insured “three or four homes” for earthquake coverage, “including mine,” he says. On Nov. 6, that all changed. A magnitude-5.6 earthquake — the largest ever recorded in Oklahoma — destroyed 14 homes and injured two people. “In the days that followed, we were flooded with earthquake calls, about 20 per day for two weeks,” Ramirez says.

According to Amberlee Darold, a seismologist with the Oklahoma Geological Survey, it’s no longer a matter of debate that hydraulic fracturing of oil and gas wells, or fracking, causes earthquakes. “It’s known that fracking can cause earthquakes and has caused earthquakes,” she says. Whether or not the injection of fracking wastewater into old wells for storage leads to earthquakes is a matter still up for debate, she says, but “there’s no question with fracking.”

Fracking, due to the nature of setting off underground explosions, is by its nature a seismic event, and the American Petroleum Institute (API) does not dispute that fracking can contribute to small-scale seismic activity. But the industry group rejects the idea that fracking causes earthquakes of a strength that can lead to a damaged home, for example. “A review of published research shows no cases of injuries or damage as a result of the very low level of seismicity related to this well-completion technique, which has been used in more than one million applications,” says an API report on the question.

Attributing any single seismic event to fracking is tricky, in the same way that attributing any single weather event to climate change is problematic. But taken on the whole, it’s hard not to link the notable increase in earthquake activity in Oklahoma with the boom in oil and gas drilling driven by advances in fracking technology. That boom shows no sign of slowing down, which may mean more earthquakes — and for the people selling earthquake insurance, more sales. 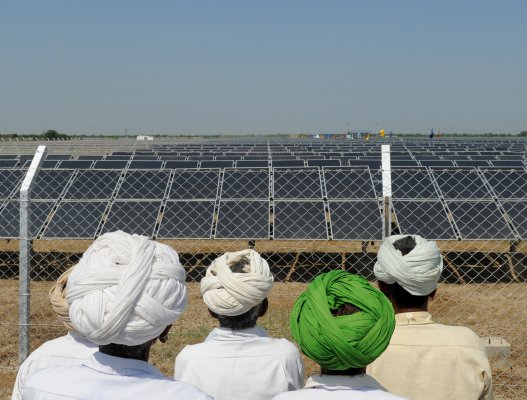 The Indian Example
Next Up: Editor's Pick