How to Tell If You Are Asexual

The following excerpts are from the upcoming book The Invisible Orientation: An Introduction to Asexuality by Julie Sondra Decker, out September 2014. Decker recounts her struggles as a member of the asexual community, a misunderstood and often denounced group.

Decker has written for the Huffington Post, The Daily Beast and Salon.

At age fourteen, I had my first boyfriend. I wasn’t attracted to him, but I kissed him a few times anyway because I was expected to. It certainly wasn’t the thrilling experience movies and romance books had led me to expect. In fact, I could barely think of an experience I’d enjoyed less. But whenever I told people I thought so, they’d say, “You’re fourteen. One day you’ll like it.”

At age sixteen, I left my second boyfriend perplexed and frustrated. I liked him as a person, but I wasn’t interested in him the way he wanted me to be: definitely not sexually, and not even romantically. My disinterest in having sex with him wasn’t rooted in the usual reasons—that “a lady” was expected to save herself, that I was afraid of sex, that I didn’t want to get diseases or get pregnant—I simply had a complete lack of interest in sex and anything related. I didn’t think sex was a gross concept. I didn’t think it was immoral. I’d just never been sexually attracted to another person. Not my boyfriend, not the hottest people in school, not the heartthrob movie stars. I wasn’t interested. Period.

My boyfriend dubbed me “Miss Non-Hormone.” I called myself “nonsexual.” I was reasonably sure that I would recognize sexual attraction if I felt it, but the mantra of “you can’t know until you try it” did inspire me to experiment a bit. And all my experiences were exactly what I’d expected: at best tolerable, at worst uncomfortable. Never enjoyable, never exciting, never intriguing enough to make me want more. I broke up with the boy because he considered sex an essential element in a relationship, and I vowed to trust myself from then on as the authority on what I was feeling and what experiences I wanted. If this “sexual attraction” thing ever happened to me, I’d go with it, and if not, I had no reason to force it. At eighteen, I fully expected to develop a “normal” sexual appetite when I got older.

Nothing changed for me, and I made my peace with that…It’s isolating and lonely to be the only person around who lacks sexual attraction or interest in sex. I know from experience, but I was used to defining and defending my feelings and choices through a privileged lens of high self-esteem. Without that core confidence, the criticism I dealt with would have been nearly unbearable…

And now, I want to help other asexual people to embrace their orientation without an instilled core of self-doubt.

Are you sexually attracted to other people? Do you feel the need to make sex a part of your life? Do you have a desire to introduce sexual activities into your relationships? If you answered no to one or more of these questions, you may very well be asexual. No expert can “diagnose” you; only you can answer this for yourself.

HOW DO I TELL?

* Gray and demi identities are considered to be “on the asexual spectrum”— there are lots of in-betweens! 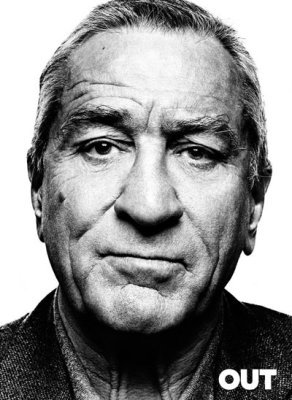 Robert De Niro: I Wish I'd Spoken to My Gay Dad About His Sexuality
Next Up: Editor's Pick