The Man Who Sealed Team USA's 2-1 Win Against Ghana

John Brooks looked as if he could hardly believe what he had done.

During the 86th minute of the U.S.’s opening World Cup match in Brazil, the 21-year-old defender executed a perfectly timed header from a corner to grab the lead against perennial World Cup nemesis Ghana.

Then he collapsed as three of his teammates piled on top of him to celebrate the goal. The game was Brooks’ first competitive match with the senior national team and his debut at the world’s most watched sports tournament.

Brooks told reporters afterwards that the game-winning goal was a literal dream come true. “I told some teammates that I would score in the 80th minute and win the game and I did it – in the 86th minute,” he said. “The dream was two days ago, and it was also a header from a corner.”

The decisive goal sealed the U.S. triumph over the Black Stars, who had beaten the American squad in two previous World Cups. However, the mere fact Brooks was even on the field was serendipitous.

The Berlin native had spent the entire first half of the match watching from the bench before he was subbed on to replace star defender Matt Besler, who was struggling to shrug off a hamstring injury.

“He played his first World Cup and scored in it,” U.S. coach and former World Cup–winning Germany striker Jürgen Klinsmann told reporters after the game. “It was quite a special day for him.”

Brooks is one of four players on the U.S. national team born to an American serviceman and a German mother.

The 6-ft. 4-in. center-back has been playing for hometown club Hertha Berlin since the 2010–11 season, after reportedly turning down an offer to join the ranks of Bundesliga juggernaut Bayern Munich in 2011.

Brooks first joined the ranks of the U.S. national team when he played with the under-20 outfit in a stinging loss to Paraguay in 2010.

Monday night was a decidedly happier occasion, and he will likely stand a little taller as the U.S. battles to make it through the so-called group of death — even facing off against the country of his birth on June 26.

The defender says the decision to play for the Stars and Stripes came naturally, even though he could just as easily have joined the superstar-filled German squad thanks to his dual citizenship. (His father hails from Chicago, and he has tattoos of Germany and Illinois on his elbows.)

“The U.S. really wanted me, so it was not a hard decision to play for the USA,” said Brooks during an interview last August.

And the young player’s contribution on Monday seems to have resolved any doubts about his nationality. Shortly after the game with Ghana, Brooks’ Wikipedia profile was changed to describe him as “the greatest American since Abraham Lincoln.” 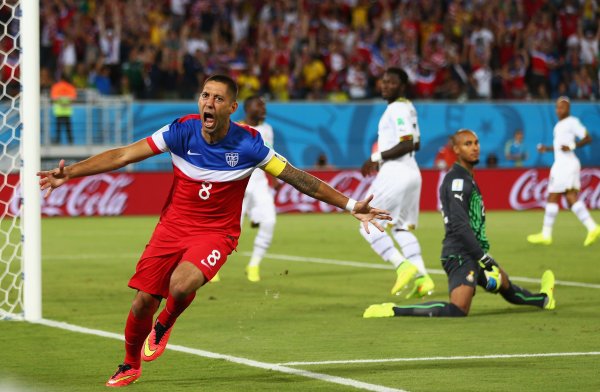 Photo Highlights From USA vs. Ghana
Next Up: Editor's Pick