Men in balaclavas are cradling Kalashnikovs as they look into a camera, somewhere in Syria. They are university students, businessmen, former soldiers and even teenagers. One by one, they urge their fellow countrymen to join the Islamic State of Iraq and Syria (ISIS), the jihadist group so extreme that it has been denounced by al-Qaeda. But these aren’t Syrians, or Uzbeks, or Chechens. They are Indonesian.

“Let us fight in the path of Allah because it is our duty to do jihad in the path of Allah … especially here in Sham [the Syrian region] … and because, God willing, it will be to this country that our families will do the holy migration,” says one in Bahasa Indonesia peppered with Arabic phrases. “Brothers in Indonesia, don’t be afraid because fear is the temptation of Satan.”

A fellow jihadist, a former Indonesian soldier, calls on those in the police and armed forces to repent and abandon the defense of their country and its “idolatrous” state ideology, Pancasila.

The video of the Indonesian men in Syria emerged shortly before ISIS seized the Iraqi cities of Mosul and Tikrit, in landmark victories on June 10 and 11. It reflects the growing attraction that the Sunni extremist group holds for the most militant jihadists from Indonesia — the country with the world’s biggest Muslim population, and one that has long battled threats of terrorism.

“Like in Syria, the Sunni jihadi movement is split in Indonesia,” Sidney Jones, director of the Jakarta-based Institute for Policy Analysis of Conflict, tells TIME. Some Indonesian jihadists, including many senior leaders of Jemaah Islamiyah (the group behind the Bali bombings in 2002 and other terrorist attacks) are loyal to the alliance around al-Nusra Front and al-Qaeda, she says, “while most of the more militant, non-JI groups are supporting ISIS.”

According to a recent report, the Syrian conflict has lured an estimated 12,000 foreign fighters, mostly from neighboring Middle Eastern countries, but also from Europe, Australia, the U.S. — and Southeast Asia. In January, Indonesia’s counterterrorism agency reckoned about 50 Indonesians had gone to fight in Syria, though it is not known how many of them joined ISIS. A Malaysian security official said more than 20 Malaysians are known to have entered Syria to fight Bashar Assad’s regime.

On Saturday, Malaysian media reported that Ahmad Tarmimi Maliki, who bombed an Iraqi military headquarters, earned “the dubious honor of being Malaysia’s first suicide bomber linked to” ISIS. Some months earlier, in November, reports emerged that Riza Fardi, who studied at the infamous Ngruki Islamic boarding school in Central Java — the same school attended by the Bali bombers — became the first Indonesian jihadist to die in Syria.

While terrorist threats have waned in Southeast Asia, thanks to imprisonment and deaths of senior jihadist figures, the civil war in Syria, and now in Iraq, has raised the specter of fighters returning home with the terrorist know-how and a militant outlook — not unlike the returnees from the Afghan war in the 1980s. “Returning fighters will have deeper indoctrination, more international contacts and perhaps a deeper commitment to the global jihad,” says Jones.

The three-year Syrian war has attracted even more foreign fighters than the Afghan war. One possible reason is a prophecy, popular among global jihadists, about the final battle before Judgment Day. “There are hadith, or sayings of the Prophet Muhammad, that predict an apocalyptic war of good vs. evil, and according to one hadith, it would start in Syria,” says Solahudin, a Jakarta-based terrorism expert.

Indonesia has a different approach to jihadism than its neighbors. Though terrorist attacks are punishable by death, it is not illegal to raise money for or join a foreign jihadist group. In contrast, in late April, Malaysia arrested 10 militants — eight men and two women — who planned to travel to Syria to take part in the war. In March, Singapore said it was investigating the departure of a national to join the Syrian jihad.

Emboldened by Indonesia’s more tolerant attitude, ISIS supporters there have become more visible and openly solicit funds. They held a collection in February at an Islamic state university on the outskirts of Jakarta and held a rally in the capital’s central business district in March. On June 15, a Sunday morning when one of the main streets in the Central Javanese city of Solo is transformed into a weekly car-free zone for strolling families, militants from Jamaah Ansharut Tauhid, a JI splinter cell, paraded in ISIS insignia, waved ISIS flags and wreaked havoc on a music performance.

They are also quite active on Twitter, Facebook and YouTube. Iqbal Kholidi, who tracks and observes Indonesian ISIS supporters on social media, has culled photos of them training and posing with the signature black flags from across the country — in Jakarta, Central Java, South Kalimantan and Poso, Central Sulawesi. They have become bolder in recent months, Iqbal says, and that is likely “because there is an impression that the authorities are just keeping quiet all this time.” 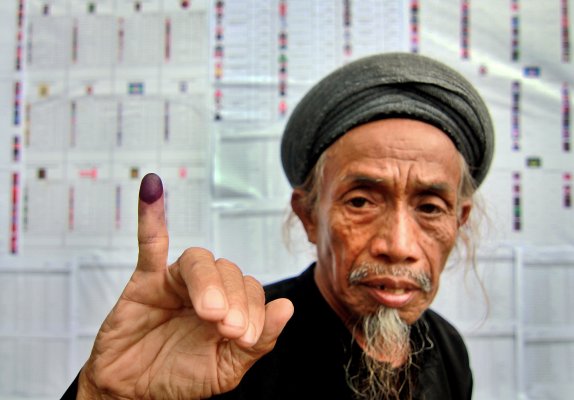 What Indonesia Can Teach Thailand and Egypt About Democracy (and Vice Versa)
Next Up: Editor's Pick