'Oh God': How to Pray for the World Cup

You might be praying and you don’t even know it: “Oh God.”

Those two words are now an official Church of England prayer for the 2014 World Cup.

Amid all the beer-drinking, game-watching and team-cheering that has consumed much of the globe since the games began last week in Brazil, the Church of England released five official prayers for the 2014 World Cup. The Rt. Rev. Nick Baines, Bishop of Leeds and a Liverpool fan, originally wrote the prayers for the 2010 World Cup in South Africa. The prayers have everyone covered — the games, Brazil, the England football team, and even a prayer for those who are “simply not interested.”

Why do the prayers matter? “God is not partisan and there are bigger things to pray for around the world, not least in Iraq, Nigeria and Sudan to name but three,” Baines explained in a statement. “At its heart prayer is about expressing our desires honestly and having our vision of God, the world and one another changed by our praying … My hope is that the World Cup would be a reminder of the joy of a nation coming together in a common cause — something that in itself is worth celebrating.”

Here are the five prayers:

Prayer 1:  A Prayer for the World Cup
“Lord of all the nations, who played the cosmos into being, guide, guard and protect all who work or play in the World Cup.  May all find in this competition a source of celebration, an experience of common humanity and a growing attitude of generous sportsmanship to others.  Amen.   ”

Prayer 2 : A Prayer for Brazil
God of the nations, who has always called his people to be a blessing for the world, bless all who take part in the World Cup.  Smile on Brazil in her hosting,  on the nations represented in competition and on those who travel to join in the party.  Amen.  ”

Prayer 3 : A prayer for those simply not interested
Lord, as all around are gripped with World Cup fever, bless us with understanding, strengthen us with patience and grant us the gift of sympathy if needed.  Amen.  ”

Prayer 5:
”God, who played the cosmos into being, please help England rediscover their legs, their eyes and their hunger: that they might run more clearly, pass more nearly and enjoy the game more dearly. Amen.” 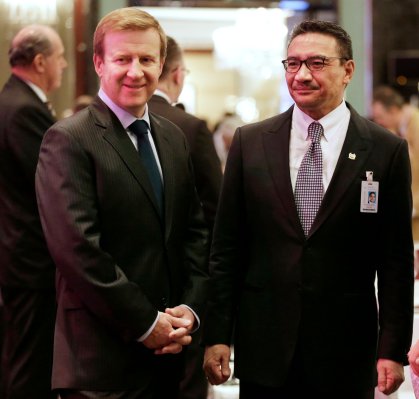 Malaysia Vows to Keep Hunting for Missing Jet
Next Up: Editor's Pick