This Is What Nintendo's Shigeru Miyamoto Thinks of Virtual Reality

Last week, the first half of my interview with Nintendo legend Shigeru Miyamoto touched on a pair of experimental new Wii U GamePad-centered games, as well as the company’s new Star Fox shooter for Wii U with its unique combinative control scheme.

After we spoke of those projects, I had a chance to ask Miyamoto several more broadly ranging questions, including one about virtual reality, the current industry interface-paramour. As always, his responses were playful, self-effacing, articulate and revelatory.

What are your thoughts on virtual reality today, and is Nintendo doing or thinking about anything in this space? Are we at the right point, technology-wise, to see this become more than a novelty peripheral?

We’ve been doing our own experiments with virtual reality dating back to the Virtual Boy. And even to some degree, the 3DS was designed with a little bit of this in mind with its stereoscopic 3D. So we’re always looking at hardware and assessing what’s possible.

And of course we understand that the hardware and technology have begun to drop in price. It’s still not at a cost basis that makes it easy for everyone to purchase as a mass-market product. But certainly it’s dropped somewhat.

As game designers, we at Nintendo are interested in VR technology and what it can do, but at the same time what we’re trying to do with Wii U is to create games for everyone in the living room. We want the Wii U to be a game system that brings video gamers into the living room. As as I explained last night [Sunday, June 8], it’s intended to be fun not only for the person who’s playing, but also for the people who are watching.

When you think about what virtual reality is, which is one person putting on some goggles and playing by themselves kind of over in a corner, or maybe they go into a separate room and they spend all their time alone playing in that virtual reality, that’s in direct contrast with what it is we’re trying to achieve with Wii U. And so I have a little bit of uneasiness with whether or not that’s the best way for people to play.

So from Nintendo’s perspective, there’s interest in the technology, but we think it might be better suited to some sort of attraction style of entertainment, say something at a video game arcade or things like that, rather than something that one person plays alone.

When we spoke a year ago, you said the Wii U’s development environment was a lot more complex than the Wii’s, which was impacting the rate of game completion and resulting in a lot of games being delayed. What are developers saying about the Wii U at this point?

It’s improved quite a bit from about a year ago, because we introduced Unity [a cross-platform game development engine] for Wii U. That’s actually enabled teams, even small teams, to be able to leverage that Unity development library to build games on Wii U. And so that’s changed the situation.

We’ve also finished really training our in-house designers and developers. Now we’re able with our internal teams to develop at a fairly quick pace as well.

How do you feel in 2014 — with such a flourishing games market, revenue-wise, and so many people in the business and so many copycat games — about game design? Is it harder for you now in that crowded market-space, or is it easier because of all the new design toolset possibilities to come up with novel gameplay ideas?

If you look at something like Project Guard, that was something that because the hardware itself is more capable now, and the processing power is better, we’ve been able to go back to an old idea and bring it to life on a new system. So there’s those types of examples.

And then you have other examples, such as the Louvre audio guide that we did on 3DS for the Louvre museum. That’s an example of taking something that existed in another medium previously, but because of the processing power and capabilities of gaming hardware, we were able to bring that to life in a new way that was interactive and created a new experience for users.

I think that where the games industry has come now, there’s more and more potential for us to look at those types of other mediums, where there may be something that exists in an original state, and by bringing that into an interactive state, we can do a lot of new and different things with it.

So I think there’s quite a bit of potential within the industry right now. But where I think there isn’t potential is in looking at what other people have done and simply copying games that already exist and trying to create your own version of that.

You’ve indicated that the conversation in game design should be about design, not power. And yet there’s the counterargument that greater processing power is like giving a painter more colors to paint with (even if painters only choose to employ a handful of them). Does Nintendo need to be more concerned with thinking not just about innovating on the interface side, but in terms of processing versatility as well?

For me, where I often struggle is when you present an idea and then it takes you a very long time to bring that idea to fruition because of the amount of work that goes into creating all the details necessary. So I tend to look for something that allows me to create my ideas in a way that doesn’t require as much work. I think that that’s able to bring us closer to what makes the game fun and interesting.

I also think that what’s important is timing within the entertainment industry; the timing with which you’re releasing these games. And so being able to create the games and bring them out in a way that you’re timing it right and surprising people with what’s in the game is also very important.

You told me last year that the Wii U was the most suitable device for the living room, given the uniqueness of the Wii U GamePad as a TV. Do you believe that’s true today, at least in the U.S., given the proliferation of less expensive devices like Roku and Amazon Fire TV? Why would people want the Wii U as a TV interface device given the rising popularity of those others?

When we first started designing Wii U, we had two ideas in mind.

One was that we wanted to design Wii U so you could start it up and play it even if you didn’t have access to the TV screen. That’s why we gave the Wii U its own independent screen with the GamePad.

The second thing we wanted to do was we wanted everyone to feel that Wii U was a devic — or set-top box or whatever you want to call it — that would be most convenient for everyone to have connected to their TV because of the way you’re able to interact with the screen and control the TV.

When we designed the Wii U, we designed it in a way that would allow you to do a lot of different things with your TV. For example, when you’re watching YouTube, people tend to watch YouTube alone, but we thought it’d be more fun for everyone to watch YouTube together. But when you do that, you then have to wait for someone to find the next thing to watch. We designed it so that while everyone’s watching YouTube on the TV, someone can be choosing what they want to watch next.

The same thing goes for streaming services. And then we also have in Japan a karaoke service where the whole family can be in front of the TV and singing karaoke, and while you’re waiting for your turn, you can be choosing what you’re going to sing next. We designed Wii U from the beginning to take advantage of that ability and give you new ways to use the TV, to be a device that gives the TV a lot of different uses in a convenient way.

What’s different between Wii U and other set-top streaming boxes is those boxes cost just $100 and all they do is send content to the TV. But with Wii U, it not only sends content to the TV, it also takes the content that can be on your TV and gives you instant access to that content by sending it all to the Wii U GamePad as well. You’re able to interact with it very easily and simply, and you get all of this in a box that only costs $300. We feel that for what Wii U is capable of doing, it’s a very versatile system and good value. But I think a lot of people look at it as just a gaming machine, they look at that $300 as the price for a game machine and they don’t get a sense for how good that value is.

That strikes me as one of your biggest challenges. I don’t know anyone, really, who uses their Wii U as a TV device.

It’s an important message, but the challenge for me is that if I start talking about those uses of Wii U, everybody starts asking me, “Well, what about the games?” But yes, what I hope is that everyone will start to understand and start telling each other that Wii U is a great thing to have connected to your TV because of everything it can do.

You mentioned at the pre-brief that you yourself had been working on the Wii U system update that dropped recently and added a quick start menu. Can you tell us anything about other future updates you’re planning for the system?

Yes, we’re definitely working on additional system updates. But the challenge is that any time you do an update that big, it requires quite a bit of testing. We can’t do those very frequently, but I can say that we’re already working on the next system update.

Some years ago, you said you were handing the reins to Zelda, Mario, Donkey Kong and such off to your teams because you felt the teams were ready and you wanted to work on smaller projects. Do you miss working on those games at all today? Or do you like finally being able to experience them as a player, having had someone else design them?

[Laughs] It’s not that I’m completely uninvolved in those games. I do spend a lot of time giving my teams feedback on overall direction, but then the other thing I do is, as they’re developing the game, they’ll bring it to me and I’ll play it and I’ll be the representative of the first-time user. I’ll say things like, “Man, this isn’t the way I want this thing to play.” So I’ll give them a lot of direction on where to go from there. 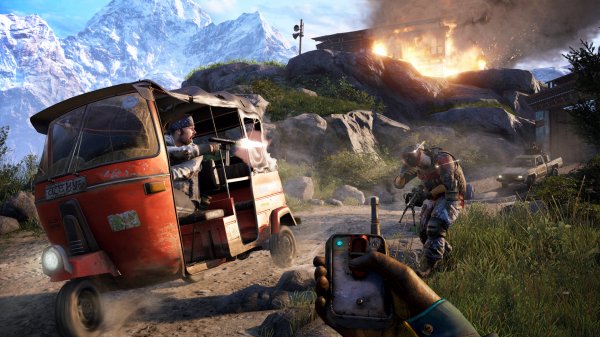 WATCH: The New Game That Lets You Ride Elephants - FarCry 4 Insider Interview
Next Up: Editor's Pick