Breaking News: Having a Father Is a Good Thing

Science has a deliciously entertaining habit of stating the obvious. For every ingenious, truly groundbreaking insight that has a researcher sitting bolt upright at 3:00 a.m. entertaining dizzy visions of an inevitable Nobel, there other insights—researched, peer reviewed and published—that you don’t exactly need a double Ph.D to figure out. And so you get studies showing that “Moderate Doses of Alcohol Increase Social Bonding in Groups” or “Dogs Learn to Associate Words With Objects Differently Than Humans Do” or the breaking story that opened with the tantalizing headline, “Causes of Death in Very Old People.” Um, old age?

But the thing about these studies is this: somebody had to do them. Science is nothing if not persnickety about proof, and if you don’t have the data, you can’t officially establish the case. So the work gets done and the box gets checked and progress marches on. It was with that in mind that I tried to read with equanimity a Father’s Day gift from The Washington Post, which led its review of Paul Raeburn’s book Do Fathers Matter? with the headline, “Yes Dads, You Do Matter.”

And so, too, I tried to embrace the idea that Raeburn’s book needs to exist at all.

The deeper question is: are we not yet past this? It’s a question Raeburn himself raises but seems to answer with an emphatic no simply by having written his book. There seems to be no killing the idea of dad the extraneous; dad the superfluous; dad, who’s nice to have around the house but only in the way that air conditioning is nice to have in the car — it makes things more comfortable, but you’ll still get where you’re going without it.

It’s as if the steady shrinking of the Y chromosome over the ages is somehow being mirrored by the dwindling relevance of the parent who carries this dying scrap of DNA. That vanishing Y, as recent studies have established, has been both arrested and overstated, but not before giving rise to headlines like “As Y Chromosome Shrinks, End of Men Pondered.” And that bit of silliness came from NPR, not, say, TMZ.

The idea of the father’s expendability has been exacerbated by the persistence of the doofus dad stereotype, something else Raeburn addresses: the well-intentioned bumbler who is still a staple of kid-targeted TV (thank you, Disney Channel). He’s the guy who can’t quite boil an egg and can’t be trusted to go shopping, but is eventually bailed out by mom or one of the kids, who set things right. Eyes roll, dad looks abashed and hilarity ensues. Except it’s not really funny—though not because it’s profoundly offensive or causes deep wounds to the sensitivities of a newly defined oppressed group. There’s enough elective umbrage at large already without adding one more voice of grievance to one more cable news show.

It’s just … off, somehow—like Jay Leno’s cringe-worthy performance at the 2010 White House Correspondent’s dinner, during which he made jokes about President Obama’s courage because (wait for it!) he invited his mother-in-law to live in the White House. There was a time, maybe, when the mother-in-law as harridan image was an apt—or at least fresh—source of humor, but that time is long past. Ditto dad as dunce.

Raeburn’s book is guilty of none of this. It’s stuffed with studies showing the vital role fathers play in their children’s lives from the moment of conception, through the mother’s pregnancy and onward. But there’s still a sense of wonder that comes with it. “The discovery of the father is one of the most important developments in the study of children and families,” is a nice line. But is it true? Is this really something that needs “discovering?” And do fathers really need a new book and a major newspaper reminding them that “You Do Matter?” Not on Father’s Day at least. And certainly not on one in the 21st century. 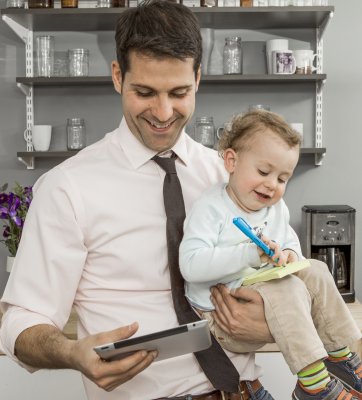 How Work Culture Changes a Man's Idea of Fatherhood
Next Up: Editor's Pick