U.S. May Engage Iran in Talks Over Iraq Crisis

An image uploaded on June 14, 2014 on the jihadist website Welayat Salahuddin allegedly shows militants of ISIS capturing dozens of Iraqi security forces members prior to transporting them to an unknown location in the Salaheddin province ahead of executing them.
Welayat Salahuddin—AFP/Getty Images
By Dan Hirschhorn

The Obama Administration is “open” to direct talks with Iran over the exploding crisis in Iraq, Secretary of State John Kerry said in an interview published Monday, as militants who say they massacred hundreds of Iraqi soldiers continued their march toward Baghdad and the U.S. embassy there evacuated some personnel.

Kerry told Yahoo News that drone strikes in the country “may well” be an option. Asked if the military cooperation with Iran might be on the table, Kerry said he wouldn’t “rule out anything that would be constructive.” State Department spokeswoman Jen Psaki later walked back the latter comment, saying on Twitter that the Administration is open to “political conversation with Iran” but “not military cooperation.”

U.S. diplomats may discuss the situation in Iraq with their Iranian counterparts as early as Monday while in Geneva for the so-called “P5+1” talks about Iran’s nuclear program, a senior Administration official said. “It may be that on the margins of P5+1, but completely unconnected to it, there may be some conversation,” the official said.

Deputy Secretary of State Bill Burns and Jake Sullivan, a national security adviser to Vice President Joe Biden, were in Geneva on Monday. With the U.S. embassy in Baghdad relocating some employees, Secretary of Defense Chuck Hagel on Monday ordered another American warship to the Persian Gulf to protect “American citizens and interests in Iraq,” a Pentagon spokesman said in a statement.

“Its presence in the Gulf adds to that of other U.S. naval ships already there—including the aircraft carrier USS George H.W. Bush—and provides the commander-in-chief additional options to protect American citizens and interests in Iraq, should he choose to use them,” Pentagon Press Secretary Rear Adm. John Kirby said.

The potential outreach to Iran comes as the Islamic Republic has already offered to help Iraq battle Sunni insurgents destabilizing the country and fomenting sectarian unrest. The Guardian, citing an unnamed senior Iraqi official, reports Iran has already sent 2,000 troops across the border. Iran’s Shi’ite government is wary of the gains by Sunni militants in Iraq, while the U.S. is watching a country where it invested years, thousands of lives and more than a trillion dollars descend into chaos. That could make common cause for frequent foes already engaged in unprecedented diplomacy over the country’s nuclear program. The Wall Street Journal first reported on the possible talks Sunday.

Congressional Republicans have criticized the Obama Administration over the situation in Iraq, and Sen. John McCain said Monday that it would be the “height of folly” to work with Iran to stabilize the country.

“This is the same Iranian regime that has trained and armed the most dangerous Shia militant groups, that has consistently urged [Iraqi] Prime Minister Maliki to pursue a narrow sectarian agenda at the expense of national reconciliation, that supplies the rockets that have been fired at the U.S. Embassy in Baghdad, that has sponsored acts of terrorism throughout the Middle East and the world, and that continues to use Iraq’s territory and airspace to send weapons and fighters to prop up Bashar al-Assad in Syria,” McCain said in a statement. “The reality is, U.S. and Iranian interests and goals do not align in Iraq, and greater Iranian intervention would only make the situation dramatically worse.”

President Hasan Rouhani of Iran said Saturday that he was open to working with the U.S. in Iran, the Journal reports.

“When the U.S. takes action, then one can think about cooperation,” Rouhani said in Tehran. “Until today, no specific request for help has been demanded. But we are ready to help within international law.”

Secretary of State John Kerry signaled Saturday that any talks would be unconnected to the nuclear negotiations.

“Whatever dialogue may or may not be taking place [with Iran] would take place on the sideline or outside the mainstream of the nuclear talks,” Kerry said. “We don’t want that linked and mixed.”

Militants who have captured Iraq’s second-largest city Mosul, as well as Tikrit, took over the northern town of Tal Afar on Monday, the Associated Press reports, which sits along the key highway to Syria. 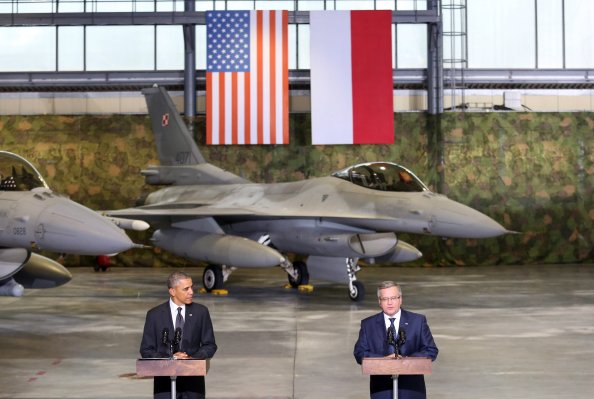 Russia Haunts Obama in Europe
Next Up: Editor's Pick