More Than 120,000 Cambodian Migrants Have Fled the Thai Junta

Cambodian migrant workers carry their belongings as they walk to cross the border at Aranyaprathet, Thailand, on June 15, 2014
Athit Perawongmetha—Reuters
By Charlie Campbell

An exodus of more than 120,000 Cambodians working in Thailand has raised fears of a migrant-labor crackdown in the wake of the Southeast Asian nation’s military coup.

Since the Thai army seized power on May 22, activists, academics and politician have been rounded up, strict censorship imposed and martial law enacted. The ruling junta has also adopted an increasingly nationalistic tone, vowing to deport illegal migrants.

“We see illegal workers as a threat because there were a lot of them and no clear measures to handle them, which could lead to social problems,” Thai army spokesman Sirichan Ngathong said on Wednesday. (Later, though, another junta spokesperson insisted no crackdown had been ordered.)

Rumors swirl of Cambodian workers shot and killed by the Thai security forces, although Ou Virak, president of the Cambodian Center for Human Rights, says he has not been able to independently verify such claims. “There must be some serious abuses actually happening, and I wouldn’t be surprised given the nationalist card being played by the junta,” he says.

“They’ve never come en masse like this before in our history,” he added. “They said they are scared of being arrested or shot if they run when Thai authorities check their houses.”

Thailand officially hosts around 2 million migrant workers, although the true figure could be as much as 5 million, according to Pimonwan Mahujchariyawong, an economist at the Kasikorn Research Center. Most are undocumented and toil in woefully paid industries such as construction, textiles or seafood processing.

Migrant workers are used to being rounded up and extorted on a regular basis, says Hall, and accept such aggravations with resigned forbearance. That means whatever fears are causing them to flee now must be serious indeed.

“These workers would have spent a lot of their earnings coming to Thailand to earn money for their families,” he says. “Unless they had been there for a long time and made a lot of money, to go back would be a huge risk for them financially.”

The deluge of returnees will likely exacerbate already strained relations between the two neighbors, which frequently spar over disputed territory and Cambodia’s harboring of figures considered “undesirables” by the Thai establishment.

Ousted Thai Prime Minister Thaksin Shinawatra was briefly made “adviser on economics” to Cambodia while wanted on graft charges in his homeland, and many of his most ardent Red Shirt supporters have found sanctuary in Phnom Penh and its surrounds. “It is an open secret that [Cambodian Prime Minister] Hun Sen is really close to the Red Shirts,” says Ou Virak.

Another factor, says Hall, is that migrant workers are often paid or ordered to attend political rallies by their employers, and so frequently come under fire by rival factions. Antigovernment rabble-rouser Suthep Thaugsuban had previously attributed attacks on his demonstration camps to Cambodian hired guns. “And it wasn’t just the Cambodians,” says Hall. “There were lots of pictures of migrants in [Burmese] longyis attending rallies.”

Establishing whether the returning migrants are undocumented workers fearing arrest, or individuals with valid papers fearing for their lives, will be pivotal to gauging the gravity of the exodus, says Ou Virak.

The economies of both countries are likely to suffer, with Thai industries reliant on cheap foreign labor and Cambodian families benefiting on remittances from migrant relatives. However, “Thailand relies heavily on [Burmese] labor much more than from Cambodia, and so the impact of this kind of return of labor might not affect the overall economic system,” says Pimonwan.

Thailand’s economy is teetering on the brink of recession, having contracted 2.1% quarter on quarter in the first three months of this year. But economic stimulus plans launched by the military — including the commencement of payments to rice farmers, who are owed $2.8 billion — and a wave of new infrastructure projects should soon bear fruit, says Pimonwan, notwithstanding the depleted migrant workforce. “We think their economic measures will support a recovery in the second half of the year,” she adds. 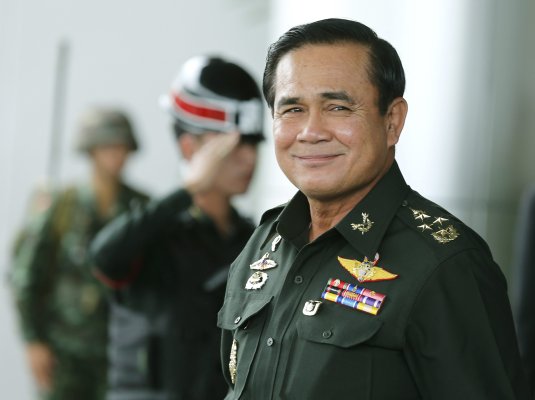 'Don't Call It a Coup'
Next Up: Editor's Pick