The Only Winners in Iraq’s Chaos: the Kurds

On a balmy, clear evening on June 12, Kurdish Regional Government officials, including the Prime Minister’s spokesman, ex-patriots and Erbil socialites, gathered on top of Safeen Mountain above Shaqlawa, about 50 kilometers northeast of Erbil, for a sun-down moon-rise party.

The group was untroubled by the hostilities 100 miles west, where two days earlier the al-Qaeda affiliated Islamic State of Iraq and Syria had seized Mosul and stormed south. Sipping wine and munching on cheese, the party goers pondered if Baghdad would fall to ISIS, which had swept within 60 miles of the capital (the consensus: probably not), and whether Baghdad’s soldiers would ever come back to reclaim Kirkuk, which they had unceremoniously abandoned ahead of ISIS’s advance, leaving it to the Kurdish peshmerga forces to defend (again, probably not).

The next day the group took an all-day outing to the highest lake in Kurdistan, enjoying panoramic views the mountainous area the Kurds like to hail as the “Grand Canyon on the Middle East.”

If civil war has come back to Iraq, the semi-autonomous Kurdish north is certainly not feeling it. Yes, the peshmerga are now in control of Kirkuk—a strategic city the Kurds have long sought to reclaim after Saddam Hussein annexed it from them in the early 1990’s. And, yes, they have beefed up security along their western borders. But the Kurds are otherwise focused on other pursuits.

Their partnership with Turkey is roaring, with oil flowing north in a newly built pipeline. They’re busy building hotels, with Hilton, Sheraton, Marriott and Kempinski erecting five-star resorts there, in order to cope with the influx of tourists that have arrived since Erbil was named the Arab Tourism Board’s destination for 2014. They’re exploring potential ski areas in the mountains and expansion of farms in the northwest.

The fact that an estimated 5,000 ISIS fighters now stand between Erbil and Baghdad only serves as a physical barricade of a partition that has been in effect for at least six months, if not years. As Iraq falls apart, the Kurds are discretely moving towards their long-sought-after goal of an independent state.

“We’ve said all along that we won’t break away from Iraq but Iraq may break away from us, and it seems that it is,” Qubad Talabani, deputy prime minister of the Kurdish Regional Government, tells TIME. “There’s been many times that we felt it could happen, that it was only a matter of time that it would happen, and it has.”

Iraq is evolving, Talabani says, into a Kurdistan in the north, and into central Sunnistan—both of which reject Shia Prime Minister Nouri al-Maliki’s increasing authoritarianism—and a Shia state in the south. There is still time, he says, before all-out civil war, for Maliki to reconsider and apply the constitution, which allows for devolved federalist-style governance, but that window is rapidly closing.

Years ago, the Kurds turned away from Baghdad to Ankara, in the hopes of finding a new regional champion. And, surprise surprise, in Turkish Prime Minister Recep Tayyip Erdogan, they found such a partner. In a striking turnaround from 2007, when the Turks were so afraid of Kurdish secession they positioned 200,000 troops on the Kurdish border, Turkey has more recently embraced Kurdistan as a moderate partner and an important steady source of oil, as Turkey seeks to cement itself as the oil gateway from the Middle East to Europe.

Turkey doesn’t yet support Kurdish independence, but Erdogan has been making progress to normalize relations with his own Kurdish population in the south, freeing the head of the PKK (Kurdistan Workers’ Party) resistance group and recognizing Kurdish as a language. The border, once lined with troops, is now open and flowing with goods and tourist traffic that moves both ways.

Turkey is the single largest foreign direct investor in the Kurdish region. “Turkey’s policy of supporting a unified Iraq has come to pieces over the perception that it is very anti-Maliki and, possibility, the Shia Islamists who run Iraq, and that they can only work with the Kurds,” says Joost Hiltermann, an Iraq expert with the International Crisis Group.

The partnership was cemented with the construction of an oil pipeline form Kurdistan to Turkey, allowing the Kurds to directly export their oil and gas without Baghdad’s help or approval. In protest, Baghdad cut off all oil profit sharing form the southern fields six months ago, forcing the Kurds to fend for themselves—given their plethora of oil contracts, they’re hardly starving. These days, Maliki has little time to resolve his oil fight with the Kurds. “Oil profit sharing right now is the last thing on Baghdad’s mind. It’s an existential threat that the Prime Minister is facing right now,” Talabani says.

Talabani warns that Iraq could be on the cusp of a full-blown sectarian war. He said he finds Grand Ayatollah Ali al-Sistani’s call to Shias to take up arms earlier this week, after the Iraqi army all but collapsed, particularly troubling. “The fatwa Sistani issued, calling on a national civil defense, could lead to that civil war, because now you have young Shias taking up arms to defend Iraq,” Talabani says. Sistani later clarified his remarks to call on everyone, especially those living in “mixed areas,” to “exert the highest possible level of self-restraint during this tumultuous period. And [we urge] all [ethno-sectarian groups] to behave in the most compassionate and kindest of manners.”

The biggest difference between the 2006-2007 Iraqi insurgency and the current push is that the Sunni tribes are allowing ISIS in, Talabani says. “They seem to be walking into towns and not causing too much damage,” he said. All the same, Sunni groups are disparate and fractionalized. “The Sunnis are completely rejecting Maliki and they’ll align with anyone with the right interests. Anyone but the Shias. The Baathists. ISIS. Ideological opposites united in their hatred of Maliki.”

What can the U.S. do? “If they had 140,000 troops, they could do a lot,” Talabani says. “They have to redevelop a resolve to reengage in Iraq, but for whom? I don’t see the U.S. stepping in to help Maliki and keep his coalition… They should help the Kurds—because we are the only viable partner left in Iraq.” Talabani said the U.S. should help arm and train the peshmerga to help stabilize the region, rather than pouring arms into Baghdad. “If we’d had 1/17th of the arms they provided the Baghdad military, we wouldn’t have laid them down. We would’ve fought and held our ground.”

Is it even possible to take a holistic approach to Iraq policy any more? “The country fell apart long ago. Now, it’s about each part picking up its own crumbs and getting on with it,” says Stafford Clarry, a longtime United Nations official in Kurdistan. “Forget about taking a national viewpoint and trying to build a country. That train left the station.” 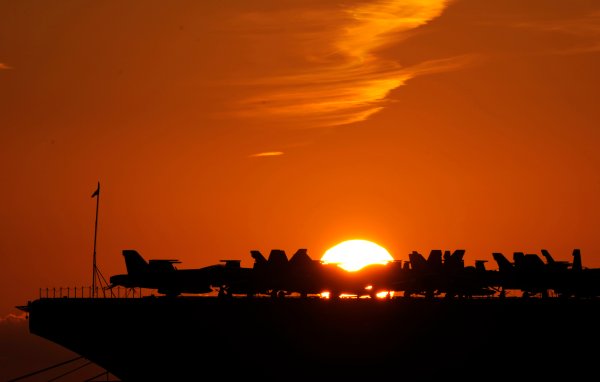 U.S. Military Options in Iraq Are Pretty Thin
Next Up: Editor's Pick