State Dept Will Beef Up Security at Baghdad Embassy

A U.S. flag flies in front of the Annex I building inside the compound of the U.S. embassy in Baghdad December 14, 2011.
Lucas Jackson—Reuters
By Nolan Feeney

The U.S. State Department announced Sunday that the U.S. Embassy in Baghdad will stay open as militant extremists in Iraq continue their offensive toward the city, but it will also take a number of increased security measures to protect its staff.

“As a result of ongoing instability and violence in certain areas of Iraq, Embassy Baghdad is reviewing its staffing requirements in consultation with the State Department,” spokesperson Jen Psaki said in a statement.

The State Department said it will increase the number of security personnel in Baghdad, while other embassy staff members will be relocated to the Consulate Generals in Erbil and Basra as well as the Iraq Support Unit in Amman, Jordan. Most of the embassy staff will remain on site and “continue to engage daily with Iraqis and their elected leaders — supporting them as they strengthen Iraq’s constitutional processes and defend themselves from imminent threats.”

The move to beef up security in Iraq comes after the State Department faced criticism over its lack of security at the U.S. consulate in Benghazi, Libya, which was overrun by militants in a 2012 attack that killed 4 Americans including Ambassador J. Christopher Stevens. But the embassy compound in Iraq has both a far heavier military presence and stronger fortifications than the Benghazi compound had. 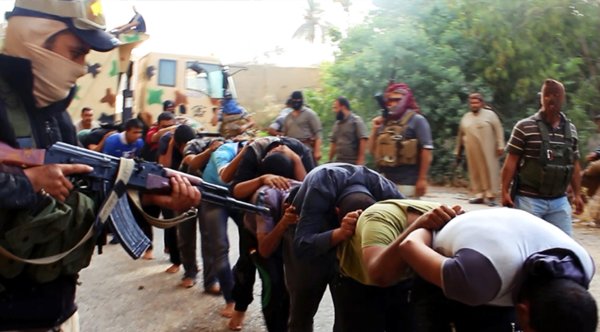 Militants Claim Massacre of 1,700 Soldiers
Next Up: Editor's Pick