It is a well-known axiom of American politics that the word we is far more powerful than I. But Barack Obama demonstrated in his clever State of the Union message that you can be the most powerful pronoun of all. “It is you, our citizens, who make the state of our union strong,” he said at the start of the speech. “Here are the results of your efforts.” And then a litany of good news: unemployment down, housing and manufacturing rebounding, increased energy independence, budget deficits cut in half.

Given the hand-wringing and rancor of the past decade, this was a fresh breeze. It informed the rest of the speech: We’re doing O.K., but there are things–not monster things, simple things–that we can do to make this a jollier place. “Give America a raise!” Obama said, smiling, joyous. He made it sound like fun. And there was, implicit in all this fun we could have together, a message to Washington: We the Politicians aren’t doing nearly as well as You the People. We’re having this big, important, out-of-proportion debate about the size of government, but when that debate “prevents us from carrying out even the most basic functions of our democracy–when our differences shut down government or threaten the full faith and credit of the United States–then we are not doing right by the American people.” So c’mon, let’s get our act together!

The speech was billed as a left-populist call to arms on income inequality, in which the President would assert his right to act independently of Congress. And yes, some of that was in there–but modestly so. There was no “soak the rich” rhetoric. Opportunity was the operative word, rather than inequality. “Opportunity is who we are,” he said–a nice, simple sentence. The deficit-reduction discussion of years past–another out-of-proportion debate–was pretty much gone too. There was an awful lot of uplift: The daughter of a factory worker who became the CEO of General Motors. The independent female entrepreneur who, with the help of a federal job-training program, built an auto-parts company in Detroit. Carefully, Obama avoided the reality that federal job-training programs are a mess, then promised to have Vice President Joe Biden sort them out, with a brief nod to the need to “streamline” the government.

There were elements that Republicans clearly didn’t like. The President’s flat-out statement that “climate change is a fact”–another nice, simple sentence–will probably roil the troglodytes, but in this ridiculous winter, it had some heft. Similarly, his defense of the Affordable Care Act contained the sharpest elbow of the night, aimed at the House Republicans’ witless pursuit of repealing Obamacare: “Let’s not have another 40-something votes to repeal a law that’s already helping millions of Americans.” At the same time, he offered to seriously consider specific Republican proposals to reform the law.

Those proposals may finally be taking shape. Three Republican Senators recently announced a plan to “replace” Obamacare–that’s a necessary fig leaf for their party’s rabid base–which contained some interesting ideas and seemed, at the very least, a good way to launch some real negotiations on the law. The Republican opposition to Obamacare has been disingenuous from the start, but there are conservative, market-oriented ideas that could strengthen the program. The President himself has cited the need for medical-malpractice reform. Even if it succeeds splendidly–and it might–this is a law that will require constant bipartisan tinkering. It would also be nice to think that some progress could be made this year on immigration: “legalizing” undocumented workers rather than granting them full citizenship may be a good interim step toward defusing the poisonous status quo.

As I listened to Obama’s speech, I found myself thinking about the media’s role in creating the tense, toxic atmosphere of the past decade. We do gridlock a lot better than we do compromise. Our pages and broadcasts are overstuffed with fanatic pessimists. There is a chronic optimism deficit. We have been inured to this by a mudslide of shockingly bad news, from 9/11 to the Great Recession, and we have exploited it by succumbing to the entertainment value of contentiousness. We have wrapped ourselves in a straitjacket of cynicism.

And then comes a moment like Obama’s concluding celebration of Army Sergeant First Class Cory Remsburg, nearly killed by a roadside bomb, struggling to rebuild himself, to regain his voice–a metaphor for our country’s slow recovery from the bombs and crashes of the 21st century. The President drove this message home, but he didn’t need to: just the sight of Remsburg awkwardly, but triumphantly, waving a hand and trying to smile was enough: If he can, we can. 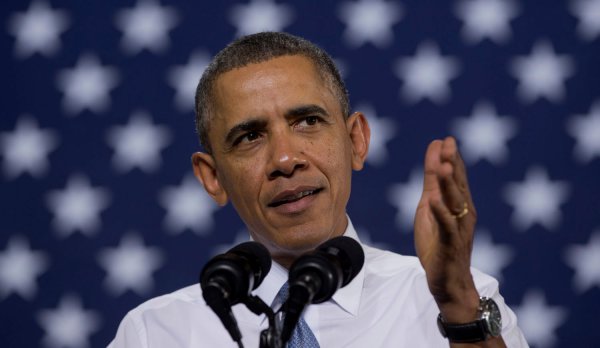 Obama Says Easing Marijuana Restrictions a Job for Congress
Next Up: Editor's Pick