The U.S. confirmed Friday that Russia sent tanks and military equipment to separatist fighters in Ukraine.

The delivery of military equipment threatens to further escalate tensions between Russia, Ukraine and Ukraine’s Western allies after pro-Russian separatists in Eastern Ukraine began an open rebellion in April.

“We are highly concerned by new Russian efforts to support the separatists,” said State Department Deputy Spokeswoman Marie Harf. “In the last three days a convoy of three T-64 tanks, several BM-21 or Grad multiple rocket launchers and other military vehicles crossed from Russia into Ukraine near the Ukrainian town of Snizhne. This is unacceptable.”

Harf said that the U.S. had information indicating that Russia had stockpiled old tanks in southwest Russia and that some of those tanks “recently departed.”

“Russia will claim these tanks were taken from Ukrainian forces, but no Ukrainian tank units have been operating in that area,” Harf said. “We are confident that these tanks came from Russia.”

Pro-Russian rebel leaders said Friday that they had received tanks, even as Ukrainian forces made inroads into driving out separatists from the southern port of Mariupol.

The government in Kiev is still trying to regain full control of eastern Ukraine—and cut off arms deliveries from across the border. On Thursday, amid allegations that the tanks been delivered across the border, newly elected President Petro Poroshenko told Russian President Vladimir Putin that the situation was “unacceptable.”

–With reporting from Zeke J. Miller 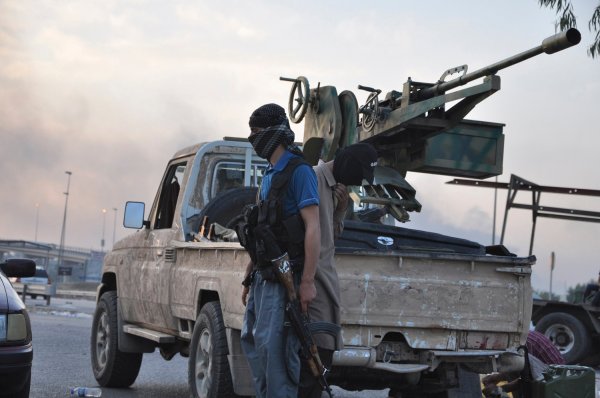