When I was eleven years old, I took the entrance exam for Hunter College High School, one of New York City’s elite schools and among the best in the country. It changed my life.

I came from a non-English-speaking immigrant family that had moved to New York from Hong Kong only six years earlier. My parents worked in a garment factory in Chinatown, where I helped them every day after school. My family knew absolutely nothing about navigating the New York City public school system, but I was lucky that my Brooklyn elementary school principal identified my academic potential, understood my family’s inexperience, and pointed me to the entry test. I remember stumbling out of the examination room, dazed by questions I had never imagined, many of which I could barely understand. But I was accepted, and the test became the defining event of my life.

Hunter gave me access to an education and a student body I never would have had otherwise, and it opened doors for college and graduate school. In eighth grade, I decided to try my luck at what was then commonly called the Stuyvesant test, the single exam that guarded admission to several of the city’s top public high schools, including Stuyvesant, Bronx High School of Science, and Brooklyn Tech. I didn’t prepare, but by then I had two years of rigorous Hunter junior high school experience under my belt, and this time, I passed by a wide margin, though ultimately I opted to stay at Hunter.

Now, decades later, a bill is being pushed in the New York State Legislature by a group of Democratic lawmakers and the New York City teachers union to change this single-exam admissions system for eight of the city’s elite public high schools. They want to introduce a broader range of criteria into the admission process, with the hope of addressing what is a current, and striking, lack of diversity at elite schools where the numbers of lower-income, Latino, and African-American students have sunk to disproportionally low levels. In addition to the current test, admissions officers would possibly consider things such as grade point averages, attendance, interviews, community service and extracurricular activities. The intentions are admirable. Heterogeneity at any school should be critical. But I think back to my own admission to Hunter and wonder what this kind of broader admissions process would have meant for someone like me, with so little information and very few resources.

Certainly, times have changed since I was in high school in the late 1980s. Extensive test preparation services are common for those students who have the resources and we can never know how I would have fared against such peers. Critics understandably worry that reliance upon a single test today may put certain racial and economic groups at a disadvantage—perhaps a biased one. So I applaud the desire to fix an admissions system that is clearly flawed, but I caution against hasty implementation of even well-intentioned changes. Whatever disadvantages I had walking into that single test with so little preparation, I would have been much more flummoxed by an interview and the need to demonstrate extracurricular activities. I wore pilled, ill-fitting clothing that had been sewn by my mother. I was very shy and had in fact been taught at home not to meet people’s eyes, for fear of appearing rebellious. I spoke with a heavy accent, having only learned to speak English a few years before. And most of my available extracurricular time was spent working in a sweatshop—a shameful secret I would never have shared with an admissions officer. If I had been pitted against a confident child from an exclusive private school, how well would I have done in an interview?

Children of highly-educated, well-off parents will always have the advantage in fulfilling any package of requirements. I worry that the proposed changes will simply create a new market for consultants to help affluent parents prepare their children to ace that competition, too. I wonder how well disadvantaged students and their parents would be able to navigate a complex and difficult maze of details, requirements and tasks. I am not arguing in favor of keeping the one-test system unchanged. I am simply asking for more time before rushing unfinished legislation into law. The solution might include investing in research that strengthens the test, or it might require the state and city to commit to long-term strategies with feeder schools that better prepare disadvantaged groups for whatever multiple criteria system is employed.

Looking at the lack of diversity in these elite schools today, it’s clear that current system is broken, but it’s possible that the changes that are currently on the table could actually further hurt the very people we are all trying to help.

Jean Kwok is the author of two novels, Girl in Translation, and Mambo in Chinatown, out June 24. She was born in Hong Kong and immigrated to Brooklyn as a young girl. Between earning her bachelor’s degree from Harvard and her MFA in fiction at Columbia, she was a professional ballroom dancer. She lives in Amsterdam with her husband and children. 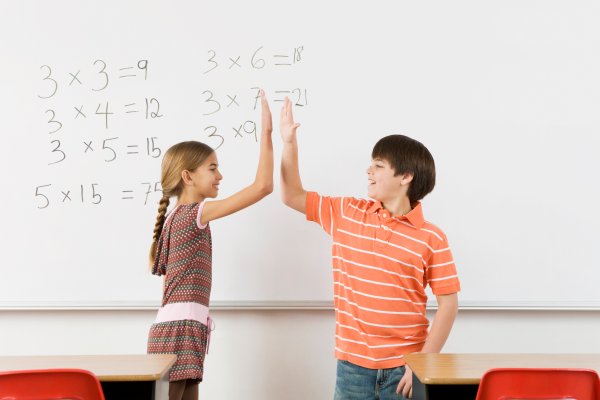 How to Learn to Love Math
Next Up: Editor's Pick