Why Polio is Doomed and Gun Violence Isn't

It's hard to spot the heroism—but it's there
Randy Plett; Getty Images
By Jeffrey Kluger

A century ago, the quickest way to diagnose polio was with the belly button test. A doctor would ask a suddenly feverish, bedridden child to lift her head from her pillow and look at her belly button. If she couldn’t do it—if the muscles in her neck and stomach and pretty much anywhere else could no longer contract and lift the way they should—the odds were that the news was bad. Within the day, the child would be paralyzed.

There has always been a particular ugliness to polio—a virus that robs a child of the simple ability to move at what should be the most restless, kinetic, exploratory stage of life. Mercifully, in most of the world that ugliness is gone—though not everywhere.

Meantime, in the U.S., a new kind of horror has taken polio’s place: the school shooting. This one also strikes at children and defies what should be one of childhood’s givens: that school is a place for learning, a place for play, a place that counts as a so-called safe space, even before we became a nation that required such formally designated asylum zones.

Both polio and school shootings are acts of violence—one viral, one human. But only one, polio, is doomed to lose, as I realized yesterday when I attended a briefing by the Global Polio Eradication Initiative at U.N. Foundation headquarters in New York, just a day after the latest school school shooting, this one at Reynolds High School in Troutdale, Ore.

The big players at the polio conference were familiar names: The Bill & Melinda Gates Foundation, Rotary International, the U.S. Centers for Disease Control (CDC), UNICEF, the World Health Organization (WHO) and the international consulting group Global Health Strategies. The purpose of the meeting was to discuss the progress that is being made to eradicate the last case of polio anywhere on the planet—making the disease only the second one, after smallpox, to have been vaccinated into well-deserved extinction.

The polio hunters are tantalizingly close to their goal: In 1988, polio was endemic to 120 countries and claimed 350,000 people—overwhelmingly children—each year. In 2013, there were only 416 cases worldwide and the disease was endemic to just three countries: Nigeria, Pakistan and Afghanistan. But the year-to-date-numbers are higher in 2014 than they were last year, thanks mostly to attacks on polio workers by extremists in Pakistan and unrest in Syria, Egypt, Iraq and elsewhere, which is allowing the virus to slip across borders.

That’s part of the reason the group assembled yesterday—to review their plan to push back against the resurgence, a plan that is breathtaking in its scope: there are the 105 million doses of oral polio vaccine that have been administered in and around Syria; the 3,176 hard-to-reach communities in Nigeria that are now being reached by health care workers bringing oral vaccine; the 2,000 health camps that have been held to educate and vaccinate in the ground zero state of Kano in northern Nigeria and the 10,000 more that are planned; the millions upon millions of children in 126 countries who will be receiving at least one dose of the injectable form of polio vaccine, which uses a killed virus and thus eliminates even the small risk of the weakened virus used in the oral version escaping into the wild.

And then, of course, there is the sheer, literally death-defying brass of the vaccine workers who regularly trudge into the Pakistani tribal areas, knowing that some of the workers who have come before them have been gunned down in drive-by shootings, and that every day they go out with their vials of drops there is a risk they won’t come home. But they go all the same.

Eradicating a viral disease is nothing less than an act of hunting molecules—protein particles so simple they don’t even qualify as technically alive—and destroying them anywhere they are hiding in the world. That’s an almost surreally difficult thing to accomplish, yet that’s what the Gateses and Rotary and WHO and others have decided must be done. And so they’re doing it.

And then, on the other side of the decency and courage arc, are the gun cowards. They are the American legislators who dare not cast a vote that will anger the National Rifle Association; the governors who walk away from the problem even as the children in their states—whose welfare they have sworn to ensure—are being murdered; the political parties that, if they acknowledge the problem at all, consider it too radioactive to take up this year, this session, this electoral cycle.

“‘No Way to Prevent This,’ Says the Only Nation Where This Regularly Happens,” wrote The Onion, in a brilliant riff on the what-can-we-do faux-helplessness of the political class. But in case they’re really wondering, here’s what they can do: they can think less about locking down their base, expanding their majority, dodging the 30-second attack ad and more about the simple safety of children. Because here is a hard fact: there are babies and young people alive today who will be dead soon because of the choices now being made. If that isn’t enough to turn an election night victory into ash, America’s politicians are beyond help. 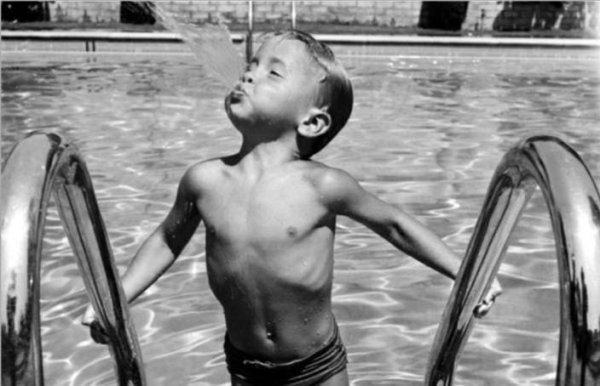 Thar He Blows! In a Classic Photo, the Magic of a Summertime Pool
Next Up: Editor's Pick