Sunnis, Shi'ites and Kurds Leap into Battle in Iraq, Risking a Split

Fighters of the Islamic State of Iraq and Syria stand guard at a checkpoint in the northern Iraq city of Mosul, June 11, 2014.
Reuters
By Aryn Baker

As fighters from an al-Qaeda inspired and staunchly Sunni Islamic militant group closed on more Iraqi cities in its march towards Baghdad, Iraq’s most senior Shi’ite cleric issued a call to arms at Friday prayers.

“Citizens who are able to bear arms and fight terrorists, defending their country and their people and their holy places, should volunteer and join the security forces to achieve this holy purpose,” Sheik Abdulmehdi al-Karbalai told his congregants in statements broadcast across the country.

Meanwhile, in the semi-autonomous northern enclave of Iraqi Kurdistan, Kurdish militias cemented control over the contested town of Kirkuk, taking militarily what they had long fought, and failed, to gain politically. Suddenly Iraq appears on the brink of a violent ethno-sectarian divide between Sunnis, Shi’ite and Kurds that poses the greatest security risk that the country, and the region, has seen since the U.S. invaded in 2003.

“We are seeing the state of Iraq disintegrate before our eyes,” says Feisal Amin Rasoul Istrabadi, Iraq’s former envoy to the U.N. and the director of the Center for the Study of the Middle East at Indiana University. “We seem to be headed now for a truly sectarian civil war.”

The Islamic State of Iraq and Syria, whose name alone indicates the breadth of its goals, has gained control of an estimated 10 percent of Iraq’s territory since its lightning strike on the northern city of Mosul earlier this week. The group’s leaders indicate that they want nothing less than complete domination of Iraq and the eradication of its Shi’ite majority, which they deem apostates. In a direct threat to Shi’ites, ISIS spokesman Abu Mohamad al-Adnani urged his fighters in a radio address on Thursday to march on the “filth-ridden” Shi’ite-city of Karbala and on “Najaf, the city of polytheism” — and home to Shi’ism’s major center of learning.

But ISIS’s blitzkrieg to Baghdad isn’t based on military prowess alone. Many of the Sunni tribes in the areas around Mosul and Tikrit, which ISIS captured a day after taking Mosul, backed the militants out of a deep-seated resentment for the Shi’ite-dominated government of Prime Minister Nouri Maliki. In fact, many Iraqis say that ISIS played a relatively minor role, and that without Sunni support they wouldn’t have been able to gain any traction at all.

“The fall of Mosul was not brought by ISIS,” says Istrabadi. “Blaming ISIS alone overlooks the fact that the movement had much broader support from Sunnis that have been disenfranchised since 2003,” when the United States overthrew Sunni strongman Saddam Hussein, reversing decades of Sunni dominance. ISIS, he says, exploited the dissatisfaction of Sunnis who have long complained that Maliki’s government has monopolised power for his sect.

“What the Shi’ites see as a conspiracy, the Sunnis see as a revolution,” says Hoshang Waziri, an Iraqi analyst based in Erbil who has written extensively about the country’s sectarian divides. “What is going on in Mosul, and Tikrit and Baiji [all cities that fell to ISIS this week], is a rejection by the Sunnis of the new Iraq under Shi’ite rule.”

In Iraqi Kurdistan, a region that has enjoyed autonomy for two decades, the tensions fall along territorial lines. Where the Iraqi forces failed to confront ISIS, dropping their weapons and shedding their uniforms as the militants approached, the Kurdish militia, known as the peshmerga, triumphed in battle. An extremely disciplined and effective fighting force, the peshmerga was able to protect several towns from ISIS’s advance. They also benefited from the Iraqi army’s retreat, claiming long disputed territory in the name of shielding it from ISIS’s reach. The peshmerga now hold Kirkuk, an oil city officially controlled by the Iraqi government, but claimed by Kurds as their historic capital. It is unlikely that they will ever give it up. “Some Kurdish politicians see this as the perfect moment to declare independence,” says Waziri. And they may be better off, he adds, given what is going in the rest of the country. “This isn’t really a Kurd, Sunni and Shi’ite war, this is a war between Sunnis and Shi’ites, one that the Kurds do not want to get involved in. The best solution for this crisis at this point would be to build three different states.”

The idea of dividing Iraq along ethno-sectarian lines dates almost all the way back to its formation at the end of World War I, when the country was carved out of the former Ottoman empire. In 2006, it had a resurgence, when then Senate Foreign Relations Committee chair, and now Vice President, Joe Biden suggested in a New York Times op-ed essay that semi-autonomous sections should be created along sectarian lines. “The idea, as in Bosnia, is to maintain a united Iraq by decentralizing it, giving each ethno-religious group — Kurd, Sunni Arab and Shiite Arab — room to run its own affairs, while leaving the central government in charge of common interests.” A year later Biden pursued the theme, telling the senate on April 24, 2007, that then President George W. Bush’s centralized plan for Iraqi governance would set Iraq up with problems for years to come. “The most basic premise of President Bush’s approach, that the Iraqi people will rally behind a strong central government headed by Maliki, in fact, will look out for their interests equitably, is fundamentally and fatally flawed. It will not happen in anybody’s lifetime.”

Back then, a plan for Iraq’s federal-style division hammered out among all the parties could have worked. But now, as all three sides gird for war, and the United States plans to move an aircraft carrier into the Persian Gulf, it may be too late. “The partition has already happened,” says Iraqi analyst Hiwa Osman. “If putting Iraq back together comes at the price of the people’s blood, let it go. If keeping the country intact means more mass graves, genocides and war, I say, to hell with Iraq.” 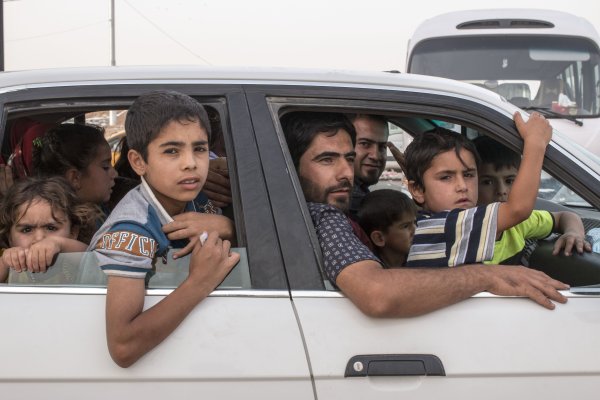 Thousands of Iraqis Flee to Kurdish Territory to Escape Unrest
Next Up: Editor's Pick