U.S. President Barack Obama meets with the President of Afghanistan Hamid Karzai and the President of Pakistan Asif Zardari in the Cabinet Room of the White House on May 6, 2009 in Washington, DC. The talks centered on how the unstable governments in Afghanistan and Pakistan can work with the United States to crack down on the Taliban insurgency.
Pool—Getty Images
By Justin Lynch

Growing up, Ronald Neumann went to a school with a gang problem. At least, that’s what many people thought. But by the time Neumann got to high school, most of the gangs had been cleaned up. The perception remained however, that his high school was plagued with unsavory characters. This served as an important lesson for the man who would later become the United States Ambassador to Afghanistan: reputation follows fact.

But Afghanistan is no high school. As the U.S. Ambassador from 2005-2007, Neumann was tasked with changing the narrative and reputation of the war. Before the reputation of Afghanistan could be fixed, however, he needed to find out what was happening on the ground. But finding the truth, in a country like Afghanistan, with competing and contradictory narratives, was a skill beyond even his skills and experience, which left the reputation building a task still undone.

Even now, the recent release of five Al Qaeda prisoners in exchange for Sergeant Bowe Bergdahl shows how fungible facts can feel. As New America Fellow Anand Gopal recently wrote, “The categories we take as rigid and unchanging, such as ‘terrorist’, are in fact remarkably fluid in the context of Afghan politics.”

This lack of a coherent reputation confuses the discussions about U.S. strategic interests in Afghanistan. Should we be propping up the current Afghan government (which will change after the second round of elections on June 14), negotiating with the Taliban, or leaving the country outright? Whose reputations are we working to preserve?

Chris Kolenda, a former Senior Advisor on Afghanistan and Pakistan at the Department of Defense, agreed that it is hard to boil things down to talking points that have a simple narrative or solution set. In a complex tribal environment that’s endured 35 years of war, it is difficult enough to string together a set of facts, let alone singular objectives or interests.

One fact, though, is that America has multiple objectives and interests in Afghanistan, and some of them conflict with each other, said Neumann. The U.S. has an interest in preventing the collapse of Pakistan, but equally must pressure Pakistan to get tougher with al-Qaeda. “Sometimes, the world is a contradictory place.”

With all of this complexity, all of these conflicting facts, narratives, and interests in Afghanistan, what should the U.S. do, especially after President Obama recently announced that he is planning to pull troops out of Afghanistan by 2016?

Clare Lockhart, President of the Institute for State Effectiveness, suggested that the Obama administration should emphasize a peace process, not a peace deal, between the Taliban and Afghan government. We can’t expect a “Hollywood style” scene with 20-men sitting around a table, striking a deal, she said.

But in this peace process, what role should the U.S. play?

Since the U.S. announced its plans to leave Afghanistan by 2016, we have nothing to offer – at least while acting alone, Amb. Neumann said.

The burden doesn’t just fall on governments. Reputations are formed by what outsiders see and hear about a place. That leaves the media with a responsibility to accurately report what is happening in the country, the three emphasized.

For the first few years after the 2001 elections, most international stories focused on the success and turnaround of Afghanistan, Lockhart said. Reporters wrote favorably of new Afghan President Hamid Karzai, and largely ignored the problems that were plaguing the country.

Lockhart confronted editors and producers, pointing out that if they didn’t report on some of the challenges, the problems of Afghanistan would never be fixed. Editors took note, but the pendulum swung too far. Soon, stories about Afghanistan emphasized the ineffective government, weak security apparatus, and failure of international aid.

Again, Lockhart called out editors for bias. “Some of the editors have actually responded, ‘Ok, we agree,’” she said. Today, the pendulum’s swing is steadier, reflected in recent coverage of the first round of Presidential elections. During voting, the domestic and international media refused to cover and report on violence within the country. “There was actually a great deal of violence,” said Amb. Neumann. “In fact, journalists and editors were getting calls from the Taliban saying ‘wait a minute, we just blew something up, and you’re not reporting it.”

For Lockhart, Neumann and Kolenda, the hope is that if international press narrative more accurately represents Afghanistan’s progress, it can build confidence both domestically and amongst international actors.

Both candidates for President of Afghanistan have committed to signing a strategic partnership with the United States, the first step on the road to stability. It’s all part of a long process. Narratives reinforcing narratives, and, slowly, improving facts on the ground. Reputations may be set in high school – but college can be fertile ground for reinvention.

Justin Lynch is the Social Media Coordinator at the New America Foundation. Outside of New America, Justin is the Youth Ambassador to the United Nations for Voices of African Mothers, where he works to promote gender equality and educational opportunity in West Africa. He is also a political blogger for the Bangor Daily News. The piece originally appeared at The Weekly Wonk. 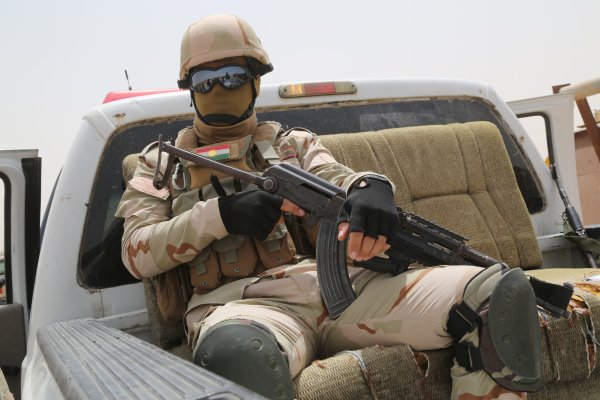 On Iraq, It Is Amazing What This White House Does Not Know
Next Up: Editor's Pick