Iraqi policemen listen to a briefing inside a military base in the capital Baghdad, on June 11, 2014, after the declaration of a state of emergency by the government.
Ahmad Al-Rubaye—AFP/Getty Images
By Aryn Baker

It took five days for an extremist splinter group of al-Qaeda to occupy the city of Mosul, one of the biggest cities in Iraq and 250 miles north of Baghdad. A day later the group, once known as al Qaeda in Iraq, and now known as the Islamic State of Iraq and greater Syria to reflect its broader role in the region, advanced on former Iraqi President Saddam Hussein’s hometown of Tikrit. A 60-vehicle convoy of ISIS units rolled into Baiji on Wednesday to take the country’s largest oil refinery. In each instance the Iraqi security forces dropped their weapons and melted away, effectively ceding nearly a third of the country to a militant organization so extreme that even al-Qaeda has repudiated it. Meanwhile ISIS is cementing control over a large swath of eastern Syria. As the militants push towards Baghdad, here are the five things you need to know about ISIS’s advance.

1. Despite the $25 billion spent by the U.S. to train and equip the Iraqi Army, it’s not fit to fight a war

Corruption, fear and divided loyalties have hollowed out the Iraqi army over the past several years. Even before these recent attacks, the Iraqi Army was losing some three hundred soldiers a day due to defections, deaths and injuries, according to a recent investigation by the New York Times. Once ISIS arrived on the scene, soldiers disarmed en masse, an indication that mid-ranking commanders either supported the militants’ advance because of tribal connections, or may have been bought off. And American assistance, based on the United States’ experience in Iraq, may have focused too tightly on counterinsurgency training, even as ISIS evolved into a full-fledged paramilitary force capable of fighting a conventional war.

But it’s not just a failure by the Iraqi military. ISIS has capitalized on widespread Sunni dissatisfaction with Iraq’s Shi’ite-dominated central government. And the group’s superior fighting skills, honed in years of fighting against the Americans in the Iraq war, and more recently in Syria, has drawn funding and would-be jihadis from around the globe.

2. The Turkish citizens taken hostage in Mosul are in serious trouble

It’s not looking good for the 49 Turkish citizens taken from the country’s consulate in Mosul, or the 31 Turkish truck drivers who were also kidnapped. Turkish officials are talking to militants in Mosul about freeing their citizens, but Turkish media are also reporting that ISIS has demanded a $5 million ransom for the truck drivers. Kidnappings for ransom are ISIS’s bread and butter, and they drive a hard bargain. Foreign Minister Ahmet Davutoglu told a Turkish television network that “any harm to our citizens and staff would be met with the harshest retaliation,” but as long as ISIS has control over Mosul, any kind of rescue attempt would be impossible. Even a prisoner exchange is unlikely: When ISIS takes a town, the first thing it does is fling open prison doors in hopes of regaining old recruits or attracting new ones. There is unlikely anyone left ISIS would be willing to trade for, and those officials may have little more to offer than threats that will be hard to back up.

3. ISIS may not be part of al-Qaeda anymore, but it still poses a threat to the United States

The split between ISIS and al-Qaeda is largely philosophical. Both seek to build an Islamic caliphate, but ISIS thinks this is best achieved through hard power, by taking terrain militarily and then enforcing Islamic law. Al-Qaeda’s leadership prefers to create a community of like-minded converts first, through displays of power. Either way, both groups seek expansion, and will use ungoverned terrain to train foreign recruits that could eventually turn those battlefield skills on Western targets. It may have already happened: last month Saudi Arabian officials arrested an ISIS cell accused of plotting attacks against the kingdom, and it is thought that the man accused of killing four in a gun attack on the Jewish Museum in Brussels fought with ISIS in Syria.

4. ISIS is unlikely to take over all of Iraq

Even if the militants had the manpower, they wouldn’t be able to hold that much territory for long. And unlike the Iraqi Army, they don’t have an air force. But they could incite a sectarian war, paving the way for success in the long term. “Sectarian civil war is the enabler,” says Jessica Lewis, an ISIS expert at the Institute for the Study of War. “They want to set conditions in Iraq that look like Syria so they can set up an Islamic state.” It may already be working: Shi’ite leaders have responded to ISIS attacks on Shi’ite targets with calls to form defense militias.

5. This newfound focus on Iraq doesn’t mean Syria is off the hook

Institute for the Study of War

ISIS’s vision for an Islamic caliphate modeled upon the early days of the Islamic empire straddles the border and erases colonial-era lines in the desert. Even as one ISIS wing took Tikrit, another wing encircled the city of Deir Ezzor across the border in Syria, cementing its control over Syria’s oil-rich eastern province of the same name. Lewis’ map of ISIS sanctuaries paints a vivid picture of ISIS’ future caliphate, and a current stronghold that not only threatens Baghdad, but the region. 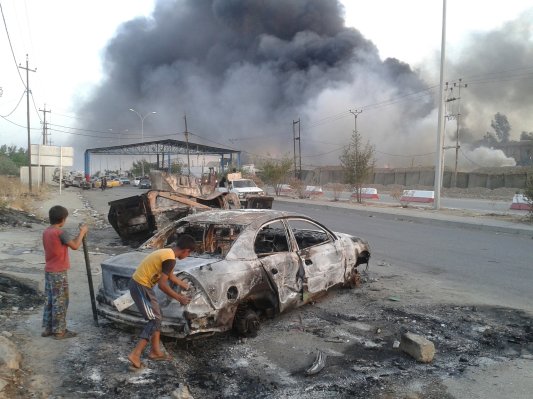